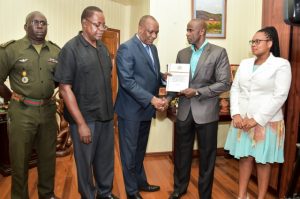 Minister of State, Joseph Harmon on Friday signaled that a major shake-up at the Customs Anti-Narcotics Unit (CANU) is likely, but he refused to say whether the substantive Head, James Singh would be returning to head that law enforcement entity.

Harmon declined to divulge details of the report of a Commission of Inquiry into the arrival of  shipping vessel in Guyana’s sea space, its detention and subsequent release until President David Granger first reads the document.

Harmon, however, hinted that there would be changes in staffing. “Insofar as personnel are concerned, there is definitely going to be some adjustments , some changes in the fight against narcotics architecture and the report I believe is pointing in that direction,” he said.

The Minister of State declined to confirm or deny whether Singh would be let go from  CANU.

Singh’s contract expires in another three years and his now three-month long leave ends in July.

The top government minister noted that in recent times drug busts are being made locally instead of overseas. “You’ll recognise the increased levels of detection of narcotic operations in Guyana, seizures in Guyana based on good intelligence and follow-up to that intelligence work. We are no longer just hearing that drugs left Guyana and was found somewhere else and this is a major change that is taking place and this is the direction in which we want to go,”  he said. 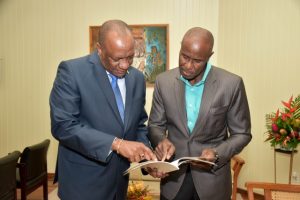 Brigadier (Retired) Bruce Lovell makes a point to Minister of State, Mr. Joseph Harmon as they peruse the Commission of Inquiry’s Report.

A CANU prosecutor earlier told the Leonora Magistrates’ Court that five persons were charged with trafficking of almost 85 kilogrammes of cocaine that were stashed in a United States-bound consignment of dressed lumber after three months of surveillance of motor racer, Stephen Vieria.

The Minister said ahead of the report , government has been streamlining Guyana’s anti-narcotics fight through the establishment of the National Anti-Narcotics Agency (NANA). The report, he said, deals with the structure, personnel and passage of information.

Government envisages that NANA will be an umbrella body for the drug-fighting entities of the Guyana Police Force, Guyana Revenue Authority and CANU.

Singh was sent on leave in late February and that was followed by a Commission of Inquiry to probe the role that agency and the Guyana Defence Force Coast Guard played in the detention and release of a vessel. 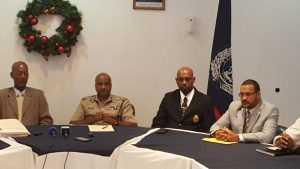 “…whether the Customs Anti-Narcotics Unit had the authority to order the release of the vessel and whether such an order was lawful and/or justifiable in the circumstances,” the terms of reference for the Commission of Inquiry states.

The private vessel was in Guyana between February 11 and 14, 2017. Two days later, on February 16, 2017 another vessel with four Guyanese aboard were intercepted by United States and Trinidad authorities in international waters with 4.2 tons of cocaine-the biggest haul in 20 years.

The probe sought to determine whether any “foreign power” had anything to do with the operation. “…the instructions issued to the Guyana Defence Force Coast Guard, the Customs Anti-Narcotics Unit and the role of any foreign law enforcement agencies in the conduct of the operation to intercept, detain and search said vessel.”

The probe will seek to determine if anyone violated Guyana’s laws and recommend disciplinary action against anyone deemed culpable.

The Commission of Inquiry had also sought to determine the circumstances under which CANU received information, including the exact date and time of the receipt of such information, that an unnamed private maritime vessel , entered into, was detained and searched in the sea space of Guyana between 11 and 14th February, 2017.