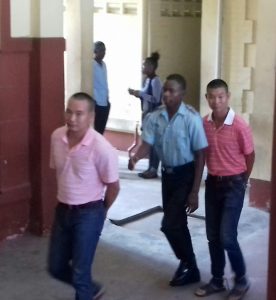 Two Chinese were today fined GYD$30,000 each for over staying their time in Guyana.

The charge alleges that between June 20, 2016 and May 30,2017 in Georgetown, they failed to comply to the condition of a permit, which is to say that while being granted permission to stay in Guyana from March 19 to June 20 they over stayed their time.

Both defendants ,through an interpreter, pleaded guilty to the charge while apologizing for their wrong doing.

The court heard that the duo came to Guyana legally in 2016 via the Cheddi Jagan International Airport and was granted a three-month stay.

On May 30 police carried a raid exercise on a logging work site in South Amelia’s Ward when it was discovered that the defendants overstayed their time and never applied for an extention to stay.

Failure to pay their fine will see them spending four weeks behind bars.