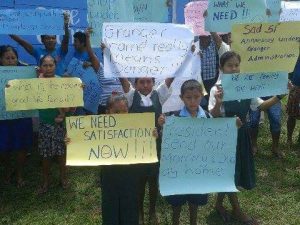 As residents of Chenpau on Monday protested the arrest of more than 20 persons mainly from that Amerindian village for allegedly illegally mining at the Kaieteur National Park, authorities are contemplating prohibiting the landing of fuel at the airstrip on that protected area to “choke” mining.

“We have recommended to the PAC that they stop fuel going into Kaieteur because fuel will literally be the lifeline for these operations. No fuel will be landing at Kaieteur except for the Kaieteur Lodge or so that is one of the ways we are looking to choke it (mining) off,” Trotman told Demerara Waves Online News. Government maintains that mining will not be tolerated at the Kaieteur National Park. 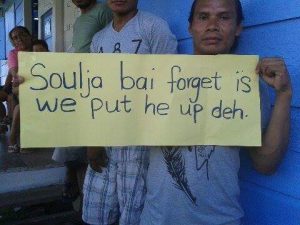 Chairman of the National Protected Areas Commission, Denise Fraser said her body first had to verify who has legal responsibility for preventing fuel from landing at the Kaieteur Airstrip. She assured that consultations would be held before a raft of measures is put in place. “We will have to have discussions with them,” she said.

Chenapau Village Toshao (village chief), Edward Mc Garrell said if no fuel is moved into the area, that would “only make it harder for the people in the village” quite in contrast to the 2015 election campaign promise. “Things will be more difficult if they should stop landing fuel at Kaieteur. It would be more difficult for the miners and with us here, we have a lot of people who have dredges. And, like I said, at the last election we were promised life would be better. We see this as not even getting close to better. It is just making things harder for us,” he said.

About 100 persons from Chenapau on Monday protested at a number of locations including the Kaieteur Airstrip against the arrest of 21 villagers for allegedly mining at the Kaieteur National Park. At least 15 excavators were also 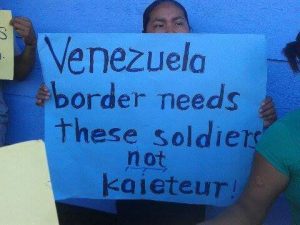 seized in the joint operation by police, soldiers and the Guyana Geology and Mines Commission.  “I saw they had our residents like prisoners of war because they were guarded with two soldiers with AK-47 (assault rifles). I see like they are just trying to raise the people’s passion up there,” Mc Garrell told Demerara Waves Online News.

Mc Garrell defended the decision by miners to extract gold from the area, saying there is no clear boundary where the Park begins and that Amerindians should be allowed to earn a livelihood from gold deposits in the area. “It will have an impact because that is the main source of our income here in the village and without mining, I don’t know what other activity there is to maintain ourselves and our families,” he said. “We have a problem with protected areas because there is no visible line to show where Kaieteur National Park. There is a sign board there but people who are mining two to three hours past that signboard were still arrested,” he said.

The Village Chief vowed that residents would not give up in their struggle to mine in the area, following the extension of the Kaieteur National Park in 1999 without consultation.

2017-05-29
Denis Chabrol
Previous: Guyanese native goes back to school at 57…After degree, immigrant hopes to teach others
Next: Trinidadian man charged with ganja possession, trafficking