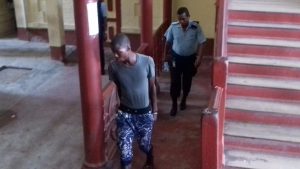 A 31- year old Trinidadian was Monday morning arraigned on a charge of being in possession of marijuana for the purpose of trafficking.

When asked to respond to the allegation against him, Thomas pleaded his innocence, saying he knew nothing about the alleged drug find.

Police prosecutor Shellon Payne objected to bail being granted based on the fact that the unrepresented man did not provide the court with sufficient reason. She also noted that the police file is incomplete since the analysis report is outstanding.

The Guyana Police Force said lawmen went to a house on Mandela Avenue at about 7PM and a search uncovered the marijuana in 382 small-sized zip-lock packets.