It was State Resources that brought flood relief—Harmon 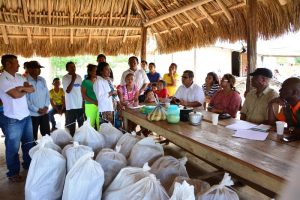 Minister of State, Joseph Harmon at one of the flood-affected communities in Region. In foreground is a quantity of relief supplies.

Government Monday  rejected criticism over the Civil Defence Commission’s (CDC) handling of the current widespread flooding in Region Eight, saying it was the resources of the State that brought relief to the affected residents.

This is according to Minister of State, Joseph Harmon, who today (May 22, 2017) provided an update on government led visit to the affected areas Sunday.

Minister Harmon was asked to respond to criticisms leveled against the CDC by entities such as the Amerindian Peoples Association which had lamented the time taken by the relief agency to provide assistance.
“It was really the resource of the State that had to bring that relief,” according to Harmon, when asked by reporters to respond since the APA claimed it was able to rush aid to the affected communities even before the CDC could establish a presence on the ground.

“It is not true to say they (APA) getting into communities,” Harmon retorted.

He explained that “communities such as Itabac and Kanapang were cut off by road and therefore our visit there was the first visit that had gone in there.”

The Minster told reporters organizations such as the APA, “would have been able to get their support to what we call the forward logistic bases at Orinduik and another base which had already been set up.”
He said the supplies are then shuttled into the affected communities using State Resources in the form of helicopters and boats.

“So they are able to get the supply to those bases but to actually get the supply to the communities, to the villages that were affected required something else and what we did yesterday we were able to fly in supplies to Orinduik and from there utilize a helicopter…it was really the resource of the State that had to bring that relief.”

Asked to weigh in on the CDC’s appeal to the public for donations, the Minister told media operatives the entity does not stockpile perishables. “So that when these activities come up they of their own accord and resources can actually purchase some of these items but they are never enough…so we always have to ask, will have to resort to the good nature, the community spirit of companies in Guyana so that they can help in this effort.”

He said too “I had the opportunity to see some people, homes that were actually completely moved away, washed away by the flood waters…on those occasion I said to the resident we will cooperate with community and the Ministry of Indigenous Peoples Affairs to ensure that those houses are rebuilt in a short space of time.”