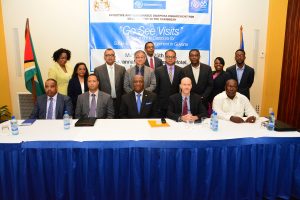 From left: Mr. Clifton McDonald, Representative of the Diaspora, Chief Executive Officer of the Guyana Office for Investment (GOInvest), Mr. Owen Verwey, Minister of State, Mr. Joseph Harmon, Regional Coordination Officer and Chief of Mission, International Organisation for Migration (IOM) in Guyana, Mr. Robert Natiello and Head of the Diaspora Unit at the Ministry of Foreign Affairs, Mr. Michael Brotherson with the participants from the three countries.

A Cabinet sub-committee has been established to finalize the Government’s Diaspora Engagement Strategy and Action Plan’ in order to give policy direction with regards its engagement with ‘Guyana’s Region 11.’

Minister of State Joseph Harmon Monday (May 22, 2017) made the announcement as he addressed the opening ceremony of a one-week confab at the Guyana Pegasus aimed at facilitating a 10-man investment team from the diaspora currently in Guyana.

The ‘Go See Visit’ initiative was organized in collaboration with the Ministry of Foreign Affairs and the International Organisation for Migration (IOM).

The team currently in Guyana will be facilitated by the various government agencies including the Guyana Office For Investment (GO-Invest) with regard their business proposals for investment in Guyana in the fields of Information Communication Technology (ICT), Agro Processing and renewable energy among other sectors.

The one week confab is being held under the theme “engaging the diaspora for socio-economic development in Guyana”.

Addressing the opening ceremony, State Minister Joseph Harmon noted that initiative is illustrative of government’s commitment to further cultivating and strengthening relations with the diaspora.

He said it is in this vein the administration has vigorously pursued its new Diaspora Engagement Strategy action plan.

That policy paper, he said, which will formally guide the administration’s relationship with the diaspora. 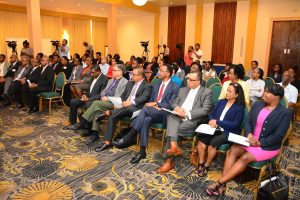 A section of the attendees at the opening ceremony of the workshop, held at the Pegasus Hotel earlier Monday, May 22, 2017.

The State Minister noted that this Action Plan is expected to address the concerns, which members of the diaspora have and have had over the years.

“The new Diaspora Engagement Strategy and Action Plan will address the concerns which you the members of the diaspora have and have had over the years. This comprehensive policy document will not be a dormant white paper; instead, it will be a policy guide that will require stakeholders to adhere to principles based on international and other proven best practices and will be predicated on the unavoidable pervasive precepts of accountability and transparency.
GO-Invest’s Chief Executive Officer, Owen Verwey, who also addressed the participants declared “Guyana is open for business.”

According to Verwey, “there are opportunities that have either been never explored, underexplored and awaiting for those who’ve got the knowledge, experience, access to capital and the methods of bringing the know-hows to the market.”

IOM Chief of Mission in Guyana, Robert Natiello, used the opportunity to laud government for partnering with that body in its efforts to pursue diaspora investments in a structured manner.

The activity saw in attendance a number of Permanent Secretaries from across government Ministries among other stakeholders.

The University of Guyana is planning a Diaspora conference to be held later this year.