Woman charged with failing to declare large sum of money 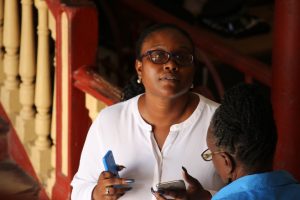 The woman, who allegedly brought more than US$10,000 to Guyana allegedly without declaring it to authorities, was Thursday granted bail.

Thirty-six year old Tracyann Todd appeared before Chief Magistrate Ann McLennan where the charge of failing to declare a large sum of foreign currency was read to her.

The charge against Todd stated that on May 4, 2017 at the Cheddi Jagan International Airport she brought into Guyana US$44,685 and failed to declare the said money at nearest immigration office. She arrived from St. Lucia.

To this charge Todd plead not guilty.

Regulations state that all passengers coming into Guyana have to declare any cash that is in excess of US$10,000.

The woman was detained by agents of the Special Organized Crime Unit (SOCU) after arriving in Guyana from St. Lucia at around 8PM.

2017-05-18
Denis Chabrol
Previous: Listen to Podcast: Why building an oil refinery in Guyana is bad business and what are the country’s options?
Next: Minister George Norton hospitalised