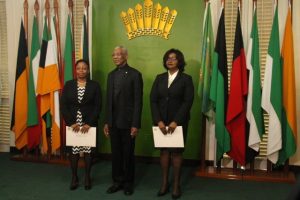 President David Granger flanked by Chief Justice, Roxanne George (left) and Justice Dawn Gregory after their swearing in as Justice of Appeal.

President David Granger on Wednesday signaled that more High Court judges are to be soon appointed, following the swearing in of two Justices of Appeal.

Cummings-Edwards, however, told Demerara Waves Online News that the names of four persons who have been recommended for the post of High Court judges have been already submitted to the President.

Former Attorney General and Minister of Legal Affairs, Anil Nandlall has said that there has been a protracted delay in appointing judge since the Judicial Service Commission (JSC) recommended in February 2016 that Attorneys-at-Law, Damone Younge and Sandil Kissoon be elevated. He assured that once the JSC’s recommendations are presented to him he would make a public announcement.

Justice Dawn Gregory and Chief Justice, Roxanne George were sworn in as Justices of the Appeal.

Justice Rishi Persaud was also tipped to be appointed an Appeal Court Judge, but the Chancellor of the Judiciary said at the time of the interviews Persaud’s father, who was a JSC member, had to recuse himself. “Therefore, Mr. Persaud could not have been interviewed. Additional members of the Commission would be sworn in today and Justice Persaud’s interview will be held shortly,” Cummings-Edwards told reporters.

Meanwhile, the President ruled government interfering in the work of the judiciary, but at the same time would like to ensure there is fairness and objectivity.

“The Executive branch of government has no interest in interfering in the work of the judiciary. It seeks, only, the preservation of a judiciary which is unbiased, unblemished and unmindful of personal prejudices,” he said.

The President pledged his administration’s support to the JSC in ensuring that there are sufficient judges and magistrates.

“The judiciary’s efficiency relies on there being a full complement of judges and magistrates. The Government will support the efforts of the Judicial Service Commission in ensuring that vacancies are filled ensure respect the recommendations for judicial appointments based on the objective criteria which have been prescribed,”  the President said.

He said the JSC is aware that an “ethically compromised judiciary can cripple the institutional mechanisms established by the legislative branch and enforced by the executive branch of Government.”

The Guyanese leader emphasised the importance of the JSC making recommendations for appointments only on the basis of clearly defined criteria in assessing the appropriateness of appointees.

“The people expect that those recommendations will emerge only from a dispassionate and objective process. Judges and magistrates are expected to be exemplars of high moral standards and personal propriety,” he added.

He pledged government’s continued respect for the authority and dignity of the judiciary. The President added that the the installation ceremony of judges “is an affirmation of the Government’s commitment to ensuring a judicial system that reflects the values of independence, impartiality and integrity.”