US$150M CJIA Expansion 2017 budget almost done; will have to approach Parliament for more—Patterson 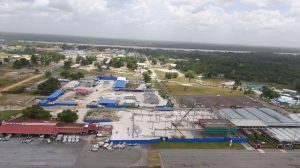 Monies budgeted as part of the 2017 allocation for the US$150M Cheddi Jagan International Airport (CJIA) Expansion Project are on the verge of being completely exhausted and government will this year have to approach its international financing partner—the China Import Export (Exim) Bank and the National Assembly for the remainder of the money to complete the project by December this year.

The disclosure was made Friday (May 12, 2017) when Minister of Public Infrastructure, David Patterson who led a government delegation—with the media in tow—on a site visit of the mega expansion project currently underway.

“We have already expended the bulk of our money …It is a foreign funded project so we would have to provide invoices to Exim Bank of China,” said Patterson.

Reporters were told ahead of the tour that already government has certified works—through consultants MMG Group and CEMCO—at 57 per cent and have paid out some US$85M of the total contracted sum of US$150M.
That money is being provided by the China EximBank in the form of a concessional loan to the tune of US$138M while the Guyana Government is obligate to fund the remaining US$12M.

This publication was told that the Ministry of Public Infrastructure has been pushing the contractors and consultants to ensure completion of the projected in keeping with the December 2017 deadline since any monies not collected from the Chinese bank at that time will face forfeiture.

“We are in what we call the final lap. All the monies have to be expended so in the coming few months there will be and increase of activites,” Patterson said. 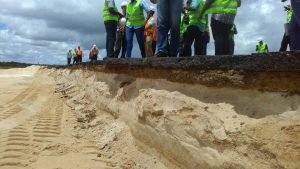 A section of the area being filled and compacted with sand at the Cheddi Jagan International Airport.

Permanent Secretary, Geoffrey Vaughn, ahead of the tour, indicated to media operatives that some 62 per cent of the total expansion project has been completed and works are on schedule for a December completion—an assurance also provided by Keliang Lui, Project Manager for China Harbour Engineering Corporation (CHEC) the Chinese Contractor undertaking the projected.

The ‘Design Build Aspect’ of the contract by CHEC has so far utilized just over US$79M of the total payouts, while the supervision consultants—MMG Group and CEMCO Guyana—have been paid just over US$3.8M. According to Vaughn, a total of US$2.3M has been spent so far on the relocation of several pieces of airport facilities and infrastructure.

Speaking to the key challenges ahead, both Minister Patterson and PS Vaughn pointed to the imminent May/June and November/December cycle of rains. According to Minister Patterson, Hydromet predictions indicate rainfall this year will be even more intense than previous years.

Following a quick briefing reporters were taken on a tour of the construction area stopping firstly at the South Western end of the airport’s runway where CHEC labeled trucks could be seen trucking sand from nearby pits to the complete the almost 100 feet elevation from the level it was at along the more than 2,700 feet of extension.
Works on the Northeastern end which is significantly more complete was also shown to reporters.

A tour of the new terminal building was also provided where some of the 311 (167 locals + 144 foreigners) man fleet of workers could be seen binding steel, damping sand filling and fitting together prefabricated aspects of the roof among other tasks.

Public Infrastructure Minister Patterson used the occasion to debunk a ‘myth’ he said is being peddled by the political opposition namely Peoples Progressive Party Member of Parliament Bishop Juan Edghill.
Patterson told reporters, unlike the claims made, the new terminal is in fact larger than provided for in the original contract.

The new facility is some 57 per cent complete but with large components of the infrastructure prefabricated and en-route or already delivered, the team expressed optimism in the timely completion of the project.

A new facility is also currently being constructed to temporarily house the airport’s operation at which time the existing terminal will be fully rehabilitated, even as the new arrivals and check-in area is nearing completion.

On completion the US$150M expansion projected is expected to yield two air passenger boarding bridges for passenger’s arrival and departures; a 450 seating departure area, escalators and elevators in addition to its extending runway catering for larger categories of aircraft.