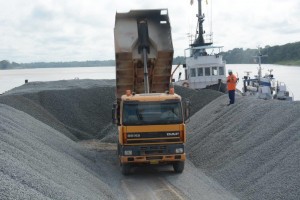 FLASH BACK: Grassalco, a Surinamese company, loading crushed stone on a barge.

The move by the Chinese comes after the brouhaha that would have erupted this past year when CHEC inked a contract with a Surinamese supplier for stones for the project by passing local suppliers.

The signing was held at the Emergency Operations Centre (EOC) at CJIA and also saw in attendance Chief Executive Officer, Ramesh Ghir, Project Consultant, Tom Rosiewich, MMM Group and a team of technical officers from the Ministry and CHEC’s management team.

Prior to the formal inking of the contracts for the supply of stones for the airport expansion, Minister Patterson recalled the public furor that had erupted at the time of the announcement of the original contract with Surinamese , Grassalco for the supply of some 300,000 tons of stone at a cost of some US$7.5M.

CHEC at the time had pointed to the price being charged by the Surinamese supplier at US$28 per ton of stone
Grassalco had at the time partnered with Zhong Da International Engineering Company.

Minister Patterson told media operatives that it was not a case where the Suriname contract was scrapped since the government had only initially granted a waiver for the supply of some of the stones from Suriname.

According to Patterson, each of the stakeholders would have had to make concession in order to see the stones being supplied locally.

At the announcement of the contract with the Surinamese supplier in September last, local suppliers were up in arms over the move.

The Surinamese company had inked a contract for the supply of stone at US$28 per ton—cheaper than the quotes that were received locally.

Under the new contracts, BK and Toolsie Quarries will be supplying stones at a cost of U$37 per ton.

It was pointed out that the contracts inked today are in fact for an initial supply of stones for the US$150M, scheduled for completion at the end of this year.

Patterson announced, too, that another company, Metallica Inc, is currently being assessed with regards quality of stones to be supplied among other considerations after which another contract is expected to be inked.