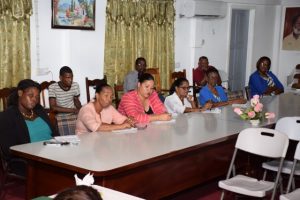 Some of the representatives of Non-Governmental Organisations and the Ministry of Social Protection during the discussion with Minister within the Ministry of Public Health, Dr. Karen Cummings

The Government is heightening its work with Non-Governmental Organisations (NGOs), and other agencies in Region Two, Pomeroon-Supenaam, to tackle suicide and attempted cases.

NGOs including the Guyana Foundation Sunrisers Centre and Hope For All have been working along with doctors at the Suddie Regional Hospital and other health facilities within the region to provide counselling, and social reintegration services to those victims of attempted suicide, as well as families that have been affected.

Representatives of the NGOs told Minister Cummings that based on their interactions with victims and their families; there is a host of issues influencing suicide in the region. They also added that easy access to suicide options and methods; provide no restraint to persons who have suicide ideation (ideas or concepts).

Some of the methods of attempted suicide most common among the victims are the ingestion of large doses of medicinal drugs and pesticide use. According to reports, a number of social reasons have contributed to these attempted suicide cases including peer pressure, domestic violence, and unemployment.

The Minister told regional officials of the hospitals and NGOs that there is expected to be a resident psychologist (Dr. Shivani Totaram) stationed in the region which will complement the counsellors and mental health workers. The Minister assured that by June 2017, the psychologist is expected to begin her work, along with a psychiatrist which will be provided by the Cuban Medical Brigade.

Meeting with the NGOs, Minister Cummings also learned that in addition to providing counselling services, the organisations conduct skills training programmes for young people. However, although the Minister commended the effort, she urged that these initiatives must comply with the Ministry’s standards, and be in sync with its mental health goals.

Miriam Hinds, representative of the Guyana Foundation Sunrise Centre opined that two of the reasons for the high rate of suicide cases in the region are unemployment and hopelessness.

“The foundation offers skills building programmes to persons… the whole idea why the Sunrise Centre was opened is to be a place where persons can feel comfortable to come to, to learn a skill because over the years, working in the region, what we have realised… one of the reasons why people consider suicide is because they are frustrated, they have no jobs,” was quoted as saying by the Government Information Agency (GINA).

Meanwhile other groups volunteer by working with the Ministry of Social Protection in providing the requisite counselling for sensitive cases. Representative of ‘Hope For All, Juliana Farley explained, “We have extended, we even work with domestic violence also suicide and so on…we have been working with persons, even collaborating with Suddie hospital.”

The Regional Democratic Council had also outlined a number of initiatives which could have been undertaken to tackle suicide and suicide ideation in the region, but due to financial constraints the projects were stalled.

The World Health Organisation (WHO) has declared that Guyana is no longer the suicide capital of the world, but there is still the need to tackle the high rates of suicide locally. Crude data on the WHO’s website indicate that as of April 4, this year, Sri Lanka had the highest suicide rate in the world at an estimated 35.3 per every 100,000 inhabitants in 2015 with Lithuania placing second with 32.7 per 100,000, the Democratic People’s Republic of Korea (DPRK) third with 32.0 and Guyana fourth with 29.0.

The National Mental Health Plan strategic line action sets out to develop a National Suicide Prevention Strategy. The National Suicide Prevention Strategy 2015 – 2020 has four strategic line actions. These line actions are to strengthen effective governance and leadership for suicide prevention, reduce access to suicide methods, to improve response capacity of mental health services in community based settings to respond to suicide and to strengthen surveillance and improve the quality of data on suicide.

2017-05-12
Denis Chabrol
Previous: Drugs shortages will lead to unconscionable raping of the treasury in parliament recess—PPP
Next: Man, who threw marijuana into prison yard, convicted