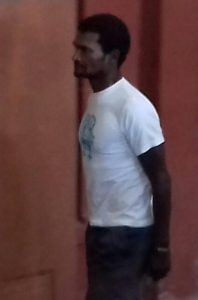 The man, who threw a bag containing marijuana over the fence into the Georgetown Prison compound, on Friday pleaded guilty and was sentenced to four years imprisonment.

Reman Marks, of no fixed place of abode, admitted to the offence of being in possession of 793 grammes of marijuana for the purpose of trafficking when he appeared before City Magistrate, Leron Daly.

After the charge was read, Marks told the Magistrate that he did not want to waste the court’s time since he is already on remand as so he would pleaded guilty to the charge.

The prosecution’s facts were that on the day in questions after conducting a cleanup exercise ranks noticed Marks throwing a bulky bag over the fence.

The bag was then retrieved and the marijuana was found inside. He admitted to the substance being his.