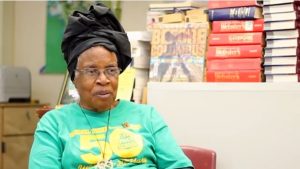 The Working People’s Alliance (WPA) is deeply pained and saddened at the death of Sister Tchaiko Kawayana, who, after a struggle with cancer, departed the world of the living to join her ancestors on the morning of Saturday May 6th 2017 in the USA.

Sister Tchaiko was the wife of the dedicated, committed and outstanding patriot and Elder Statesman of Guyana, Brother Eusi Kwayana.

Members of the WPA Executive Committee and the wider WPA fraternity, express our deep condolences to Brother Eusi and the children at this most painful moment which has witnessed the irreplaceable loss of a well beloved wife/ mother. The untimely demise of Sister Tchaiko is also a great loss to the party at home and abroad.  The historic role she played in the struggle of the African community and the Guyanese nation predated the formation of the WPA. We recall that her activities in Guyana had its genesis in the work of the African Society for Cultural Relations with Independent Africa (ASCRIA) in the late 60 s and early 70s.

Sister Tchaiko’s decision to come to Guyana was influenced by her work and struggle in the African community in the USA, the country where she was born and her active involvement in the struggle of the African diaspora, and on the Mother-Land of Africa.

Tchaiko or Sister Tchaiko as she was fondly called was among the early wave of activists who responded to the appeal made by ASCRIA and the Pan African Secretariat – which at the time operated in Guyana – for Africans in the diaspora to come to Guyana and participate in the political process, which at that time was being led by the Forbes Burnham administration.

From the time of her arrival in Guyana Sister Tchaiko became immersed in the struggles of the African community and the Guyanese nation. Her commitment to our people and country was a lifelong endeavor. From the moment she answered the call to serve to the time of her death, she remained unwavering in her support of the Guyanese struggle, for liberation, racial pride, political and racial reconciliation and the empowerment of women and children and the elderly.

In ASCRIA she played an integral role in the organization’s work to promote the “Cultural Revolution” which sought to reawaken African self-consciousness. As a member of Ascria, Tchaiko supported the political decision for the formation of the WPA and worked to advance its cause.

Sister Tchaiko’s commitment to the liberation of the Guyanese masses was exemplified by the role she played in the group, “Women Against Terror” where she was on several occasions caught up in the confrontation against the supporters of the administration. She did not escape the violence that was unleashed against the political opponents of the government in the period of the seventies and eighties and received a sound beating on North Road in the vicinity of Bourda Market on September 17th, 1983 while participating in a protest demonstration for the recognition of democratic and human rights in Guyana.

Due to political victimization and economic difficulties she was forced to return to the USA to seek employment, in order to maintain her children. Years later she was joined by her husband and the family was reunited. Even in that difficult period of adjustment she continued to pursue her cultural, educational, political and community work as she nurtured her family.

Her life was one of devotion to family, the African Nation and Humanity in every part of the globe. Her star shines brightly in our continued struggle for true emancipation.

The home going celebration will be on Tuesday, May 16th at Atlanta Ga.

2017-05-10
Denis Chabrol
Previous: Alarming discrepancies unearthed at Indigenous Peoples Ministry—PS
Next: “We are committed to your country”- CEO of Hess oil exploration partner with ExxonMobil