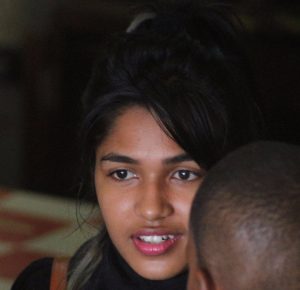 The reputed wife of convicted drug lord, Barry Dataram, was Wednesday jailed for nine months after she was found guilty of attempting to smuggle prohibited items in the Mazaruni Prison

Anjanie Boodnarine, 22, was sentenced at the Bartica Magistrates’ Court which is responsible for that magisterial district.

She was arrested in March, 2017 with a quantity of cigarettes that she was attempting to take to her husband who is serving prison terms for drug trafficking and passport forgery.

The Guyana Prison Service has intensified its search of visitors and prison service personnel, as authorities continue to crackdown on prohibited items including cigarettes, marijuana, cellular phones, and chargers.

Dataram was, in his absence, sentenced to five years imprisonment on September 27, 2016 for the possession of 129 kilogrammes of cocaine for the purpose of trafficking at his home on April 16, 2015.

He and Boodnarine, who was acquitted of the drug trafficking charge, were caught in neighbouring Suriname with forged Guyanese passports in October, 2016 in Suriname and handed over to Guyanese police.