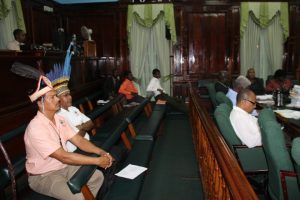 Chairman of the National Toshaos Council (NTC) Joel Fredericks (white shirt) and his deputy, Toshao Lennox Shuman in the public gallery of the National Assembly’s Chamber during debate on a PPP-sponsored motion to scrap the Lands Commission of Inquiry.

A debate on a motion piloted by the Peoples Progressive Party Civic (PPP/C) was cut short today (May 8, 2017) when government using its superiority in the House opted not to go beyond the scheduled 10 PM close of the day much to the chagrin of the political opposition.

That motion which was moved by former Amerindian Affairs Minister, Pauline Sukhai—now in the opposition benches—calls for National Assembly to demand of Head of State, President Granger, to rescind the Commission of Inquiry (CoI) to look into land issues surrounding Amerindian lands and those belonging to freed African slaves.

Following government’s refusal to budge to allow for the debate to be completed at today’s session, a compromise was eventually met when government agreed to have two speakers make their presentations to the debate at this sitting before resuming the process on June 16.

Present for debate was Chairman of the National Toshaos Council (NTC) Joel Fredericks along with his deputy, Toshaos Lennox Shuman.

The St Cuthbert’s Mission Toshao was on the receiving end of scathing criticism by Minister of Indigenous Peoples Affairs, Vice President Sydney Allicock.

He accused Toshao Shuman of essentially being a traitor to his people over ’30 pieces of silver’ when he decided to take an about face on the effectiveness of the Amerindian Act of 2006 and other matters related to the indigenous peoples. 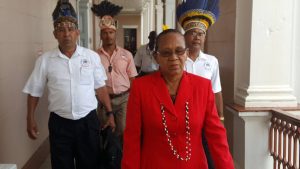 Former Chairperson of the National Toshaos Council, Yvonne Pearson- now an opposition People’s Progressive Party (PPP) parliamentarian-leads a delegation of top NTC members into the Chamber of the National Assembly to listen to the debate.

Allicock was at the time presenting government’s defense of the establishment of the CoI and called on members of the political opposition to desist from peddling falsehoods among the Amerindian communities which has since caused unease to set in.

The Vice President said he was referring to the notion addressed in a whereas clause of Sukhai’s motion which speaks to the fact that the mandates of the Commission could in fact undermine the legitimacy of Amerindian land rights and lead to the dispossession of Amerindian land titles and future land titling.

He was adamant, and called on the members of the PPP/C to provide whatever evidence it has to prove its claims.
Calling on the PPP/C to be truthful, Minister Allicock suggested there isn’t even a “veiled suggestion regarding dispossession of Amerindian Land Titles.”

Sukhai was adamant in her presentation that government must come clean on whether it was looking to reopen the Land Titles issued to Amerindian communities.

The former minister in her arguments, pointed to the Terms of Reference of the CoI, which points to the Commission inquiring into Amerindian Land Titling and demanded of government answers as to what was the demanding factor to have the issue included in the ToRs.

Pointing out that the tittling process for Amerindian lands is already catered for in the Amerindian Act of 2006, Sukhai queried what level of the reopening of the land titles does government envisages.

Apart from lamenting the ‘degutting’ of the PPP/C’s motion by the Speaker of the National Assembly, Dr Barton Scotland, Sukhai also bitterly complained over the seeming perception that Amerindian related issues are always placed on the back burner.

“Every time an indigenous issue is placed before the House or discussion significant enough to have impactful results on indigenous people, it always appears we don’t have time for it.”

Former Attorney General, Anil Nandlall had moments earlier complained to members of the media that the Speaker of the National Assembly was openly looking to stifle robust debate piloted by the opposition.

He, too, was referring to the Government’s refusal to have debate concluded at this sitting of the National Assembly.