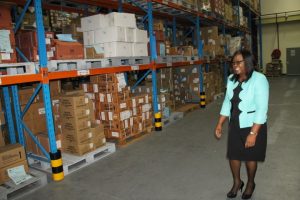 The Guyana Government this past year spent close to GYD$2 billion under questionable circumstances, including without a public tender or on an emergency basis.

The revelation was made today (May 8, 2017) in the National Assembly when Government Ministers supplied responses to a slew of questions posed by Peoples Progressive Party Civic Member of Parliament, Bishop Juan Edgehill.

With regards the Ministry of Communities and its purchase of drugs for distribution across the 10 administrative regions, it was disclosed that last year purchases in excess of $2B was spent but there was no public tender since the purchases were not advertised.

Minister of Communities, Ronald Bulkan indicated to the members of the House, that the GYD $2.1 billion allocation was almost completely exhausted but advertisements were only placed in the Guyana Chronicle and Stabroek News newspapers in February for the supply of drugs to Region 10.

According to Minister Bulkan, “the Barima/Waini to Upper Takatu/Upper Essequibo Regions indicated that the drugs and medical supplies were not publicly advertised since they were purchased on an emergency basis or as the needs arise.”

There was no pre-qualification done for suppliers across the Regions.

Meanwhile at the Georgetown Public Hospital Corporation (GHPC), it was found that pharmaceuticals accounted for some GYD$681.2 million.

According to the information supplied by Public Health Minister Volda Lawrence , GYD$631 million of the total GYD$681 million were used to purchase emergency pharmaceuticals and medical supplies accounted for GYD$55.6 MILLION in expenditure in 2016.

The first two months of the year, according to the information supplied by Lawrence, saw $1.3B being expended on Pharmaceuticals and GYD$761 million.

The Minister said no awards were made to suppliers since July 2016 given delays in the bid process.

New GPC was found to be the largest supplier for the Ministry based on its share of allocations expended.
Responding to queries made on the purchases made by the Ministry of Public Health, it was disclosed that in 2016 government expended some GYD$1.6 billion.

Questioned on the operations of the Materials Management Unit and the alleged collusion between staff and suppliers to defraud the State, Lawrence disclosed that one such employee who was found with vials of insulin in his possession has been turned over to the police. The individual, she said, has since been arrested and is currently on bail but is on the lam.

She said, too, that police were also called into investigate allegations at the West Demerara Regional Hospital drug bond where the pharmacist was unable to account for several ampoules of pethidine, codeine and morphine.

That matter is still engaging the attention of the police, according to the Minister.

The Public Procurement Commission recently launched a probe into the procurement of more than GYD$600 million in drugs without it passing through the National Procurement and Tender Administration Board.

The Ministry of Public Health last week said an expert from the Pan American Health Organisation/ World Health Organisation has been tasked with conducting a forensic audit into how the public health sector has been sourcing its drugs and other medical supplies.