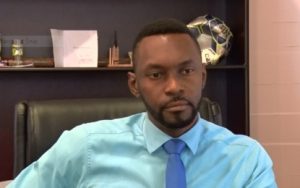 Less than one day after allegations of financial irregularities were levelled against Director of Sport, Christopher Jones, he denied the claims and deemed them “politically” motivated and jealousy of his achievements in promoting and developing sport.

“I have every reason to believe that this article is part of a naked attack on my person, character and integrity which is politically motivated. Further, it is my view that the intellectual authors of this attack are steeped in envy of the achievements of the NSC and the consequent positive public attention which has followed,” he said in a statement.

Jones did not name any politician.

The Sport Director reasoned that the accusations are being made against him weeks after the successful NSC Sport Awards at which the medallists of Guyana’s CARIFTA team were awarded University of Guyana scholarships by the NSC.

“Further, it is my view that the intellectual authors of this attack are steeped in envy of the achievements of the NSC and the consequent positive public attention which has followed,” he said.

He  stopped short of saying the privately-owned Kaieteur News was part of a smear campaign and even suggested that he knows who is the source of the information in the article. “The source of the Kaieteur News article is unfortunate but as a disciplined public servant, I shall say no more.” The newspaper report said it was in possession of documents

Jones, who has been accused of a number of financial irregularities allegedly for goods and services,  denied the published allegations and said he welcomes a probe. “I am pleased to have read that an investigation is being conducted. I commit my full and unreserved cooperation with same as I am confident that I and my team at the NSC will be completely vindicated,” the Director of Sport said.

In turn, the Sport Director called for a probe into the origin of the newspaper article titled and located here
National Sports Commission Director allegedly pays assistant $3M for doing nothing   “Further, I call for an independent investigation in uncovering the intellectual authors of the article and that those culpable have appropriate action taken against them by the relevant authorities,” he said.

“I wish to unequivocally state that this article is based on falsehoods and I reject any assertion or allegation of improper conduct on my part as Director of Sport. At all times I have executed my duties with the highest level of integrity and within the law,” said Jones, a former Chairman of the Guyana Youth and Student Movement (GYSM), the youth arm of the People’s National Congress Reform (PNCR).

The PNCR is the largest political party in the governing coalition of A Partnership for National Unity+ Alliance For Change (APNU+AFC).

Boasting of forging strong relationships between the NSC and all national and other sporting bodies in raising the profile of sport in Guyana, he hinted that he is being starved of resources. “This has been achieved even as I have operated under severe internal constraints and with limited resources – the details of which I do not wish to disclose at this time,” he said.