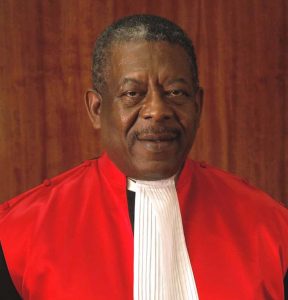 President of the Caribbean Court of Justice, Sir Dennis Byron.

The Caribbean Court of Justice (CCJ) on Tuesday ordered Guyana to refund the Trinidad-based beverage company, SM Jaleel and its subsidiary in Guyana,  a yet to be agreed large amount of Environmental Tax levied between 2011 and 2015 in violation of Caricom’s trade rules.

“The Court holds that Guyana has been clearly unjustly enriched at the expense of SMJ and GBI (Guyana Beverages Inc.) having collected an unlawful tax directly from them in clear breach of the Articles of the RTC (Revised Treaty of Chaguaramas,” CCJ President, Sir Dennis Byron said in delivering a summary of the judgment.

The Court ordered Guyana to pay to the companies “the aggregate sum paid by them in Environmental Tax” from March 7, 2011 to August 7, 2015 together with interest at four percent per annum from the date of judgement. Guyana is also ordered to pay 70 percent of the cost of the court proceedings which are to be taxed if not agreed, Sir Dennis said. He also ordered Guyana to file with the CCJ on or before December 9, 2017 a report on its compliance of those orders unless the companies do so before.

The CCJ gave one month from Tuesday for Guyana and the companies to quantify and agree to the aggregate amount to be refunded and legal costs, although the Court knows the figure based on the receipts.

While the companies wanted the refund to be calculated from 2006, the CCJ used the opportunity of this case to define a five year limitation period for the settlement of cases about the unlawful collection of taxes in breach of the RTC. “The Court holds that a five-year limitation period is appropriate and will protect States from stale claims in respect of which there would be inherent difficulties in trying to produce documentary or oral evidence. It will, above all, encourage claimants to file suit in a timely fashion,” he said.

He remarked that the Environmental Tax did not promote cross-border trade but tended to frustrate free  movement of goods, distorted competition and discriminated against the companies “who should have been protected as belonging to the Community.” Only non-Guyanese companies, including those from sister Caricom countries, had been required to pay the GYD$10 environmental tax on all non-returnable containers.

Sir Dennis said Guyana has no  basis for retaining the unlawfully collected tax. On the question of Guyana retaining the tax that had been already passed on to the customers, the regional judge said customers freely chose based on the price and quality of the beverages.

The CCJ said Guyana could not be allowed to retain by way of set-off whatever the amount of the tax cost that the trader managed to cover despite being subjected to the unlawful tax. “To permit this course of action would be to allow Guyana to be unjustly enriched by exploiting the trader’s efforts and by making an illegal profit out of legislation known to be unlawful,” he said.

Sir Dennis referred to a similar case by the Suriname company, Rudisia, in which the CCJ had ordered that Guyana refund the environmental tax amounting to more than US$6 million (GYD$1.2 billion). “Given the Court’s decision in the Rudisia case with similar tax, SMJ and GBI are prima facie entitled to a declaration…by Guyana of the monies it should never have collected,” he said.

Guyana in 2015 amended its Customs law to remove provisions that discriminate against companies in the rest Caricom Single Market. “The legislation did not provide for an exemption for non-returnable containers which qualify for Community treatment. There was no similar tax payable in respect of locally made non-returnable containers, this giving Guyanese manufacturers a clear competitive advantage over other Caricom manufacturers, thereby allowing discriminatory treatment to those Caricom manufacturers,” said the CCJ President.