Youths charged with murder of teen at school concert 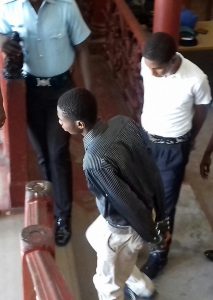 Two youths were Monday remanded to prison after appearing in the Georgetown Magistrates’ court for the murder of 16-year old Brian Charles Yearwood.

The incident occurred at the Covent Garden Nursery School  compound during a concert there.

The duo was not required to plea to the indictable charge and they were remanded to prison until May 22.

Reports indicate that Yearwood of Lot 69 Public Road, Grove, East Bank Demerara was attending a concert at the school when he was stabbed once to the center of his chest, allegedly by the 17-year-old school dropout.

He was rushed to a hospital where he was pronounced dead.