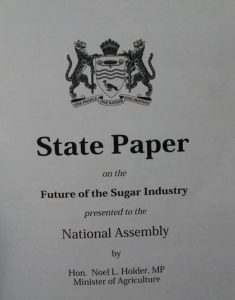 The Guyana Government has decided to reduce the amounts of sugar it produces on an annual basis, retain only three factories and take over health  and drainage and irrigation services offered by the Guyana Sugar Corporation (GuySuCo)- all aimed at producing a targeted 147,000 tonnes of the sweetener annually at a profitable price.

The announcement was made today (May 8, 2017) by Agriculture Minister Noel Holder, when he circulated a ‘State Paper on the future of the Sugar Industry.’

Holder in making the announcement—previously alluded to by Minister of State Joseph Harmon—said too that government has begun soliciting Expressions of Interest (EOI) for the divestment of the state-of-the-art, Skeldon Sugar Factory because Guysuco cannot afford the amount of monies required to fix that facility. He said the monies from Skeldon would help to bail out the cash-strapped and debt burdened state-owned corporation. “Funds generated from the divestment of Skeldon Estate will go towards reducing the Corporation’s debt and supporting its capital programmes for both sugar and the diversification initiatives,” he said.

The Minister told the House, while government intends to retain sugar production as its core function—cultivating at five sites and processing at three—there has been a conscious decision taken to limit production to 147,000 tonnes of sugar per year, in order to satisfy local demand and to meet with international commitments.

The Government proposes that sugar production should be contracted to approximately 174,000 tonnes of sugar annually produced from Albion, Blairmont and Uitvlugt Estates, to satisfy the demand in the local markets (25,000 tonnes per year), CARICOM and regional (50,000 – 60,000 tonnes per year) United States of America (12,500 tonnes per year and ) and the World Market (50,000) tonnes.  The administration said focus would be on producing for direct consumption, value-added sugars and providing electricity to the national grid (co-generation).

The State as the sole owner of GuySuCo, according to Holder, “will retain as many workers needed for all operations of the merged estates and factories.

On the cost recovery front, the administration will be looking to take on the Draining and Irrigation costs previously undertaken by GuySuCo.

“GuySuCo as part of its corporate social responsibility operates a number of health care centers and dispensaries in the Berbice and Demerara Regions,” he said.

According to Holder, “the options available to the corporation are the transferals of such health centres and dispensaries to the government or the recovery of costs from the government.”

Speaking to the woes facing the sugar industry locally, the Minister explained that the industry has been unable to keep pace with the changes in the economy and has in fact completely lost its place as the single largest contributor to national earnings.

He said the chronic problems included the migration of skilled and experienced managers, exhaustion of its cash reserves, deteriorating field infrastructure and factories and an unstable and adversarial industrial relations.

He noted that the employment costs in the industry accounts for some 48% of the total costs of the company between 2010 and 2015 and absorbed some 73 per cent of the revenue earned by GuySuCo during that period.

“The dire revenue situation coincided with the loss of preferential markets and prices that the company enjoyed from 1976 to 2009.”

On the matter of the entity’s existing infrastructure Minister Holder told the members of the National Assembly that GuySuCo’s sugar operations will be limited to the Albion-Rosehall, Wales-Uitvlugt, and Blairmont factories with the aim of producing annually 174,000 tonnes of sugar annually.

He said the Albion and Rose Hall estate’s cultivation will be amalgamated and will result in the closure of the Rose Hall factory at the end of 2017 with some of the lands being made available for diversification.

He said too the Enmore factory will closed at the end of 2017 when all cane would have been harvested while the East Coast Estates have been earmarked for diversification. 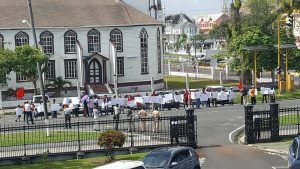 Sugar workers and their families protest outside Parliament Building.

Shorty before the bell rang summoning parliamentarians to the Chamber of the National Assembly, several lawmakers from the opposition People’s Progressive Party (PPP) joined sugar workers outside Parliament Building in a picketing demonstration.

The sugar workers, many from the already closed Wales Estate, complained bitterly again about their economic plight.

After the parliamentarians went inside and Monday’s sitting began, more unarmed police were called in from the nearby Brickdam Police Station to order the protesters to move beyond the barriers at either the eastern or wester end.

Despite minor vocal resistance, they complied peacefully and continued to their protest.