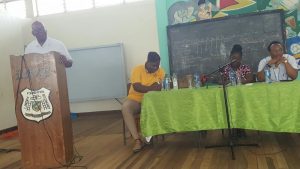 Finance Minister, Winston Jordan on Sunday announced that alcohol and cigarette imports would be stamped, as government moves to stamp out smuggling and rake in more taxes to help bridge a GUD$38 billion deficit.

Jordan acknowledged that the stamping programme would not be fool-proof. “We have to make an effort because if we dint we might as well throw in the towel,” he said.

The Finance Minister’s announcement that comes against the background of repeatedly stated public concerns by Banks DIH about the adverse impact of smuggled beverages on local production. Similar concerns have also been raised by the Demerara Tobacco Company about smuggled cigarettes.

The Finance Minister cautioned against increasing the taxes on alcohol and cigarettes because it will “cause more smuggling, saying that already such items are highly taxed.

The veteran economist also restated that customs officers have been deployed to Eteringbang to tax fuel being smuggled from neighbouring Venezuela. “We don’t want to stop the trade but you mist pay your taxes,” he said.

Jordan used the opportunity to highlight that government has increased wages and salaries, and pensions as well as reduce the Value Added Tax from 16 percent 14 percent, resulting in a loss of GYD$10 billion.