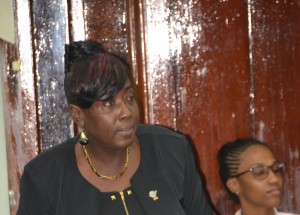 Junior Minister of Communities, Valerie Patterson who is responsible for housing.

Finance Minister, Winston Jordan on Sunday said government would be prepared to offer concessions and tax holidays to private sector investors in value-added agricultural production, even as his ministerial colleague lamented that Lindeners have failed to take advantage of multi-million dollar opportunities to improve their livelihoods through the Linden Economic Advancement Programme (LEAP).

“Government doesn’t want to get into economic activity, but we would support any private sector individual or individuals who would like t get involved in this particular aspect with concessions and tax holidays and so on once you make the move,” Jordan said.

Touching on the need to use local woods in a planned GYD$12 billion housing development programme, the Finance Minister said he is prepared to grant concessions for wood drying and treatment facilities to reduce Guyana’s importation of pinewood and sheet rock.

Minister of Housing, Valerie Patterson on Sunday chided Lindeners for failing to take advantage of the European Union (EU)-funded LEAP, a packaging facility was built at Moblissa but the well-equipped and supported farmers did not use it. “LEAP had built a packaging facility at Moblissa, encouraged the farmers to use that facility, plant. We put everything in place. You know not one farmer ever used that,” said Patterson, the former Chief Executive Officer of the Linden Enterprise Network (LEN).

LEN is the successor to LEAP.

She noted that one Mr. Baljit has since taken over the demonstration farm at Moblissa. “LEAP did land-clearing and all of that for the farmers so sometimes things are not being done but people don’t pay attention and the LEAP money done and the project just left there,” said Patterson.

The Junior Minister of Communities, who is a Cabinet member, recalled that under her tenure, LEAP had supported “a lot of manufacturers” to do packaging as well as involve the Department of Education in having students participate in the demonstration farms.

Patterson expressed concern about those who complain to visitors, but fail to remember that opportunities previously provided were not taken up.  “Nobody seems interested but we wait when strangers come and complain like if nothing is ever being done. We need to wake up from our slumber, get up and get and get things done for ourselves,” she said.

The minister noted that unlike LEAP that had financed several activities, the successor LEN programme has not attracted much interest because no one wants to pay. Patterson was upset that the bottled water that she was given was made in Trinidad. “Guyana- the land of many waters, Linden the place of many creeks. We drinking Trinidad water? Come on!”