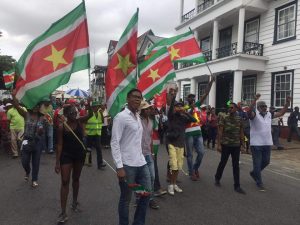 Legal actions are being taken since the authorities Tuesday prevented the organizations to hold a demonstration at Independence Square in the Surinamese capital, Paramaribo. Initially the unions planned to present a petition to the Speaker of the House and applied for a license as is required by the authorities.

However, the District Commissioner changed the planned route of the protest march unilaterally and without the consent of the applicants for the license. As a result, protesters could not go to the Independence Square. Only six participants were allowed to move on to The National Assembly to present the petition to Jennifer Geerlings-Simons, Speaker of the House. Geerlings-Simons said that she will investigate why protesters were barred from the square. “This is a violation of our fundamental right to hold peaceful demonstrations everywhere in the country”, said Robby Naarendorp, Secretary-General of the C-47 trade union. This is the first time ever that a group was denied access to the Independence Square to demonstrate.

“The Square is not the property of the president”, said Curtis Hofwijks of the activist movement ‘We zijn moe’ (We Are Fed Up). For the sixth time this month, thousands of people chanting anti-government slogans, went to the street to protest against government mismanagement. Again protesters called on the government to revoke the price hike for fuel “which affects all segments of society”. “They have fooled us this time, but next time we will be prepared. I will not let them stop me next time to move on to the Square”, said a defiant Hofwijks. Trade unionists argued that authorities could not give a plausible explanation why they could not hold their march at Independence Square. In the past, President Desi Bouterse, then as leader of the opposition, himself with his followers held numerous rallies against the government on the square.

Meanwhile opposition parties are mobilizing for a mass rally against the government next month. Last week activists, c hallenged leaders of the opposition who participated at the protest, not to come alone. “Were are your supporters? We don’t want to see only you. Come with your followers”, Stephano ‘Pakittow’ Biervliet challenged the opposition. On May 25th it is exactly two years since the incumbent administration won the general elections. Shortly after the vote the country’s economy spiraled out of control due to excessive government spending and dwindling export revenues.

Falling prices for oil and other commodities that play key roles in Suriname’s economy have exacerbated the hardship, which triggered a massive devaluation of the Suriname dollar and runaway inflation at the pace of 55 percent last year. Tuesday the General Bureau of Statistics released a statement, saying that in March the year inflation was 41.8 per cent. Since last week Pmresident Bouterse started rounds of talks with civil groups including trade unions calling on the organizations to try to find solutions for the country’s economic problems around the table rather than on the streets.

However, the groups leading the protest demonstrations argued that the increased fuel prices should be reversed before they will engage in talks with the government.