By John Mair in London 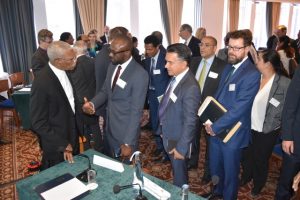 Investors lined up to meet with President David Granger in the United Kingdom.

He is virtually on a one man trade mission to the United Kingdom. But,unlike those before him,President Granger comes bearing the gifts of oil wealth or the promise of it.

He addressed a packed Cholmondeley  Room in the House of Lords beside the Thames on Tuesday evening. It was the Caribbean Council’s Annual Reception and he the star guest along with Vice President Carl Greenidge and London High Commissioner F.Hamley Case.The largely white audience were eager for business opportunities in the new El Dorado-which they were also drinking!

Granger started by lamenting the seeming fact that many great Guyanese were to be found in the UK. He name-checked Baroness Amos and Gina Miller,the Article 50 Campaigner. He thanked the UK for leaving an inheritance of  a “stable state-our institutions are our pride”.

Back home ,Granger then gave them a tour d’horizon of the ecology,flora and fauna of the Guiana Shield and its’ importance to the world. It was a masterclass in bio-diversity. He pointed to the various Guianas/Guyanas on the Shield and how they linked.

He listed  the wealth of raw materials generated by Guyana “without bauxite no US planes would be built, there would be no RAF (Royal Air Force)” but said  the country now had to add value to those in order to prosper. 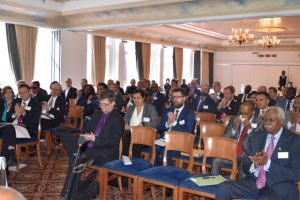 In the audience at the Investment Seminar on Guyana were business executives from infrastructure, port development, oil and gas, tourism and hospitality and shipping sectors, as well as some members of the diplomatic community.

Guyana was now wide open to investors especially with the oil wealth due to come ashore from 2020.But ,he announced, some of that would be ring fenced in a Sovereign Wealth Fund to be established with help from Norway,Canada and the Department for International Development  in Britain.

His address was treated with much respect

The President was followed by Baroness Anelay the ‘Minister for the Caribbean’ in the UK Foreign Office. She announced a trip next week to Guyana,Trinidad and Venezuela  in the midst of the British General Election campaign. She told her audience that the UK and the Caribbean have “a shared history and shared values and we are committed to the Caribbean.”

Then the oilmen cometh! They had sponsored the evening and were determined to make their pitch.Angus McCoss of Tullow Oil said they had three concessions on the edge of the huge Exxon Mobil oil find off Guyana They hoped they would come good but it “is a great opportunity and we have a great responsibility”. His US counterpart ,Gil Holzman,the President/CEO of Eco Atlantic re-inforced the case for Guyana as the new oil El Dorado.

After the  speeches, the President was collared by many in shiny suits determined to press their case and a business card into his hands.

That previous amber gold of Guyana continued to flow long after the President and his entourage had gone. Will this trade mission be a success? Will he be able to square the circle of a ‘Green Guyana’ and massive oil development?