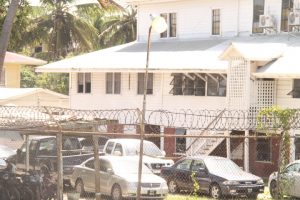 The headquarters of the Guyana Police Force’s Criminal Investigations Department.

The two persons, who are implicated in an alleged plot to commit treason, on Tuesday confronted each other in the presence of police investigators at the headquarters of the Criminal Investigations Department (CID).

CID Head, Superintendent Wendell Blanhum said the man, who reported the alleged plot to commit treason, arrived at the CID headquarters. “A confrontation was held between the reporter and another individual and on completion of the confrontation, the police are in the process of dispatching the case file to the Police Legal Adviser,” he said.

The accuser then appeared on the privately-owned HGPTV Nightly News where he recounted what had allegedly transpired between himself and the businessman known as “Rasta.”