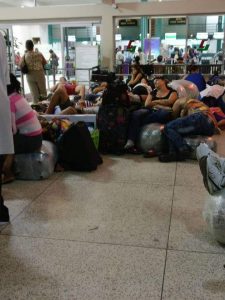 Several stranded Cuban passengers had no other option but to sleep at the Cheddi Jagan International Airport after the Guyana Civil Aviation Authority blocked the Honduras-based EasySky airline from flying to Guyana due to safety concerns.

“They began to correct some of their safety deficiencies and these are the short-term corrections I had a question on so we allowed the plane to come in last night; not to bring in passengers but to evacuate the passengers who are here,” he told Demerara Waves Online News.

The flight was due to leave the Cheddi Jagan International Airport at 10:30 AM Tuesday with 75 passengers and cargo before returning 10 hours later to fly out more persons. In all, 433 passengers had been stranded in Guyana since last week.

Field said EasySky would not be allowed to resume flights to Guyana until a complete review of its application and approval process is completed, but he declined to go into details. “They don’t have permission to bring in more passengers until we have carried out a complete surveillance on them,” the GCAA official said. “The authority will be conducting a complete review of their approval process and also of their current operation,” he said.

The Director General said the process could take a couple of weeks .

Hundreds of Cubans fly to Guyana weekly to shop large quantities of clothing, electronic and other items.

Roraima also represents the United States-based Dynamic Airlines which has recently been fined by the US Department of Transportation for cancelling flights without adequate notice and leaving passengers stranded.