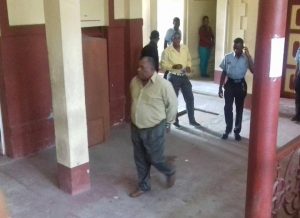 A 57- year old Financial Consultant was Tuesday morning remanded after three fraud charges were laid against him.

Clayton Alleyne of 179 South Bel Air stood before Chief Magistrate Ann McLennan and pleaded not guilty to the charges which alleged that between November 3 2016 and February 8 2017 he obtained from three persons large sums of money in exchange for a promise to provide them financial help.

Police Prosecutor Arwin Moore told the court that the defendant should not be granted bail since more charges of this nature are to laid against him as ranks from the CID continue their investigation.

Further, Moore told the court that Alleyne was charged previously and placed on bail for those offences and now if granted bail would not return for his trial.

Chief Magistrate Ann McLennan ordered that Clayton Alleyne be remanded until May 16 when the case will come up again.