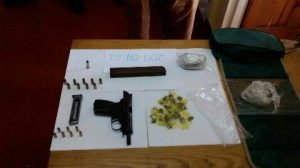 The items that police said they seized from a mason in Albouystown, Georgetown.

A mason was arrested allegedly with ganja, a gun and bullets in Albouystown, and police indicated he could be arraigned as early as Monday on a number of charges.

The Guyana Police Force said lawmen got a tip-off, “responded promptly and arrested” the mason on Albouys Street, Albouystown allegedly with one .32 pistol, two magazines, 17 live rounds of ammunition and 82 grammes of marijuana.

“The 40 year old suspect on seeing the ranks, immediately dropped a bag containing the illegal items and attempted to scale a fence but was quickly apprehended. He is being processed for court,” the police force said. The arrest was made at about 1PM Saturday, April 22, 2017.

He would be charged with being in illegal possession of a firearm and ammunition without being the holder of a license, and being in possession of a narcotic for the purpose of trafficking.