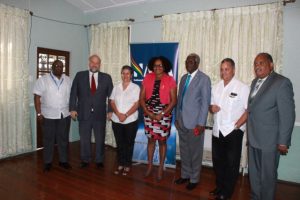 President of the Florida headquartered Guyanese American Chamber of Commerce Wesley Kirton has suggested that the Guyana government looks to the Diaspora for investment in upgrading airstrips in the country’s hinterland.

He threw out the suggestion while chairing the first Annual General Meeting of the National Air Transport Association of Guyana held on April 19 here.

Kirton said that public private partnerships involving Diaspora entrepreneurs could provide for the upgrade of several airstrips in Guyana’s interior to include asphalted runways, small terminal buildings with bathroom and other facilities, security and even small hangers for aircraft that could be based in various hinterland locations thus saving them having to fly to the city when they do not need to.

“I would like to posit the idea that Government look to the Diaspora for investment through public private partnerships to upgrade the many airstrips in the interior which serve the mining and indigenous communities and which could also help spur the development of agri-business. The facilities which this investment should include are the provision of asphalted runways with bathroom and other facilities, security and storage…even cold storage for agriculture produce from the various locations. I hope the Honorable Minister might look into this possibility although I know that there are national security considerations that would have to be taken into account,” Kirton said.

He has since reported that Minister in the Ministry of Public Infrastructure with responsibility for Aviation, Annette Ferguson, has invited the Guyanese American Chamber to submit a concept paper that would outline how such a public private partnership would function. Kirton said that such a paper will be prepared and submitted within 30 days. Minister Ferguson was the keynote speaker at NATA’s first Annual General Meeting during which Kirton’s suggestion was made and among others participating were US Ambassador to Guyana Mr. Perry Holloway, Chairman of the Guyana Civil Aviation Authority (GCAA) Colonel. (ret’d) Larry London, GCAA Director General, Lt. Colonel (ret’d) Egbert Field and chief executive officer of the Cheddie Jagan International Airport, Ramesh Ghir.

Kirton also spoke of the importance of international air links with Guyana pointing to the fact that Guyanese in the Diaspora look forward to heightened levels of customer service from many of the airlines serving Guyana and destinations in North America.

“We in the Diaspora are also stakeholders in that we travel in large numbers and represent the single largest category of passengers using these services. We deserve higher levels of quality customer service. However, I must say that I am aware of the efforts of the GCAA to ensure that these airlines ensure that they provide internationally acceptable levels of service to Guyanese and that safety is never compromised. I also want to point out the critical role that air transport has to play in facilitating the efficient and affordable movement of products, especially agricultural produce to markets in North America. Our agri sector remains critical notwithstanding the country’s oil discoveries,” Kirton told the meeting.

He also praised the domestic air transport operators for forming themselves into an association and for seeking to provide safe and cost effective service to passengers travelling to the hinterland. “Again the Diaspora has an interest here since when we come as potential investors or bring potential investors we want to ensure safe and reliable transport around the country, not to mention when we come home with our families to enjoy all that Guyana has to offer.”