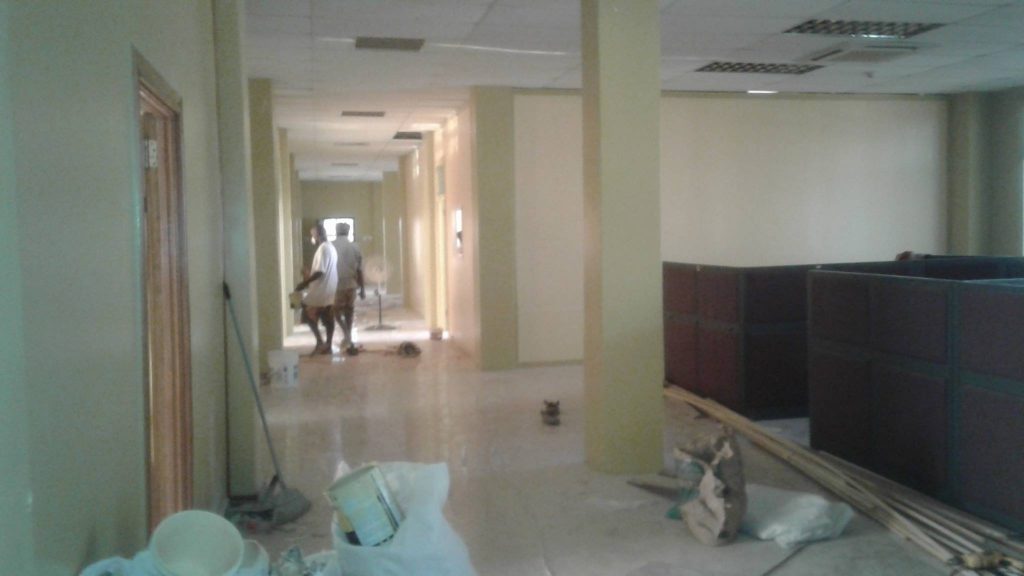 Workers renovating the third flat of the five-story building on Camp and Lamaha Streets on behalf of the Ministry of Public Health.

The Ministry of Public Health has already taken charge of the third floor of the five-story building at Camp and Lamaha Streets, although the University of Guyana (UG) Council is yet to approve the US$28,000 per month rental of the edifice.

The move has sparked off grave uncertainty about the possession and rental of the building that UG  Vice Chancellor, Professor Ivelaw Griffith is determined to lease the building to house a downtown campus that he says will rake in much needed dollars for the cash-strapped institution.

It is unclear how the Public Health Ministry is conducting preparatory work if the University of Guyana Council has not yet approved the rental of the Camp and Lamaha Street building.

Ministry of Public Health spokesman, Terrence Esseboom told Demerara Waves Online News that his ministry is renting the space from UG and the Maternal and Child Health Department should have already moved in, but UG advised that they were having some issues and it was put on hold.

“The last information I got is that they had some issues and we were supposed to move into the building already,” he said.

In a circular to the UG community dated Wednesday, April 13, 2017, Griffith said the plan is to rent one floor to a government agency and two others to a bank.  Investigations by Demerara Waves Online News on Thursday confirmed that it is the Ministry of Public Health that would be occupying the third floor.  In fact, carpenters were seen on the third floor doing remedial works to several cubicles. The workers confirmed that the Ministry of Health would be responsible for that floor.

Vice Chancellor Griffith confirmed that UG’s Council, the highest decision-making body of that tertiary institution, has already turned down the proposal to rent the building. However, the proposal goes back to the Finance and General Purpose Committee of UG on Thursday and then to Council a second time.

Concerns are also being raised about whether the Vice Chancellor has already committed UG to renting the building without Council’s approval since has been pushing for an agreement retroactive to April 1, 2017.

Pros and cons of renting the building

Several sources close to the decision-making bodies of UG have questioned the wisdom of renting the building at Camp and Lamaha Streets when UG would be only utilizing only one flat with four classrooms of 30 students each.

UG has already approved the establishment of the School of Entrepreneurship and Business Innovation, but several Council members are opposed to the rental of the Camp and Lamaha Street building to house that entity.

Professor Griffith has said in the circular to the university community that space is vitally needed to expand UG’s operations and offer courses and programmes that will bring in much needed revenue.