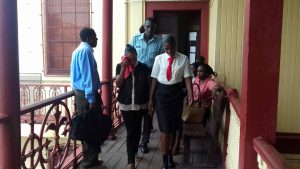 A fifty one year old caretaker of Lodge Housing Scheme was Wednesday  jailed for three years after accepting the fact that she had cocaine in her possession for trafficking.

Bernadette Evandey Warren stood before Magistrate Fabayo Azore in the Georgetown Magistrates’ court to answer to the charge.

CANU said on Sunday, April 16, 2017 CANU ranks at Cheddi Jagan International Airways pulled Warren of 228 Lodge Housing Scheme, Georgetown and conducted a search of her luggage and discovered a false wall in one of her suitcases.

Investigators were told that She was bound for the United States after receiving her first American Visa earlier this year.

Some 1.504 Kilograms of cocaine was found concealed in her luggage.

The facts presented in court stated that the illegal substance was found in the walls of her suitcase after a search was carried out on her suitcase.

In her response to the court, Warren said “I am sorry it happened “.

Magistrate Azore sentenced her to three years behind bars with a fine of 4.1 million dollars.