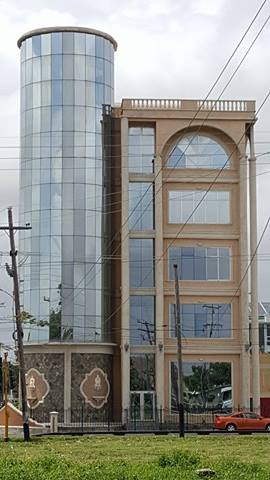 The building at Camp and Lamaha Streets where the University of Guyana proposes to house its ‘Downtown Campus’ to offer pricey specialised courses and programmes.

The University of Guyana’s Council, its highest decision-making body, has refused to approve the rental of a five-story building at the corner of Lamaha and Camp Streets, Georgetown for US$28,000 per month.

However, Vice Chancellor, Professor Ivelaw  Griffith is not giving up, saying the cash-strapped institution needs the space at the proposed “downtown campus” to offer courses that will bring in more revenue. He said the proposal would be discussed by UG’s Finance and General Purpose Committee before it is taken back to the Council on April 27, 2017.

“People sometimes have what is called a priori misinformation…This is an opportunity to clarify. People have all sorts of  misinformation, people have their own personal positions,” he said in response to questions on the issue posed by Demerara Waves Online News.

In a document circulated to the University of Guyana community on April 13, 2017, he said the main costs are a one-time investment of GYD$5 million in building out the facility to suit UG’s needs; a one-off expenditure of GYD$4 million in furniture and equipment, a  monthly rental of GYD$6 million, GYD$2,524,000 for electricity, water, telephones and Internet in the first yearand GYD$1,268,000 for maintenance including air condition, elevator, generator, security and janitorial services. The document states that the utilities and maintenance costs will be shared by the sub-lessees.

Dismissing those who have rejected the idea of the Downtown Campus on the basis that UG should build rather than pay hefty rentals, Professor Griffith cited Texila American University that first rented space at Critchlow Labour College but has since constructed its own campus at Providence, East Bank Demerara. “We don’t have the luxury of waiting two, three years to build. We will be building but we got to pick some low-hanging fruit,” he said.

Still on the issue of renting, he told the University community that government provided only 11 percent of the capital funding that was  requested for 2017, causing the tertiary institution to rent and then build. “This experience suggests the need for a two-fold strategy: rent in order to bring in some revenue immediately, while we pursue funding- from either private or public sources- to construct, keeping in mind that sourcing funds and then constructing a facility could take between one and three years,” he said.

The Vice Chancellor said UG plans to offer short courses at the Downtown Campus which will house the proposed School of Entrepreneurship. “It is always difficult to pay something more but you just can’t hope to get better by paying cheap,” he said.

The Vice Chancellor said in his memorandum his administration has commissioned a study to determine the viability of renting premises to cope with the lack of appropriate space at Turkeyen. “A new location is needed because of the inadequacy of quality of space for classrooms, faculty offices and student engagement at Turkeyen, plus the need to introduce new programmes and other revenue-generating measures,” the Vice Chancellor states.

Griffith said a government agency and a commercial bank have already agreed to sublet parts of the building and the rest will be used to house the School of Entrepreneurship and Business Innovation, and rent the penthouse for lectures, weddings, receptions and other events. The School was approved by the academic board on April 11 and will go to the Council on April 27, 2017.