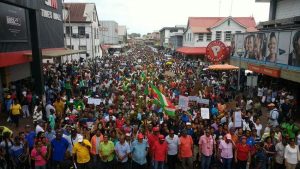 PARAMARIBO, Suriname; Riot police in Suriname detained several individuals including a union leader during anti-government protests in the capital Paramaribo. During the fourth demonstration since April 6, participants called on the government to stop its “policies of destruction”. Numerous protesters chanting anti-government slogans even called for president Desi Bouterse to resign. Although much smaller in numbers than the previous demonstrations protesters vowed to continue their rallies until the recent price hike for fuel has been revoked and government freeze alleged new measures which would cause more hardship for the people.

Armand Zunder, president of the Progressive Workers Union (PWO), said that union leaders since 2012 have warned the government to change its policies, keep prices under control and prevent inflation and devaluation of the country’s currency to prevent erosion of the spending power of workers. “The government didn’t listen but instead continued its destructive policies resulting in an economic crisis”, Zunder told the gathering. The union leader argued that in stead of pilfering the hard fought earning of workers the government should renegotiate deals it struck with multinationals Iamgold and Newmont in order for these companies to contribute more to the state coffers.

Shortly thereafter when demonstrators took to the streets they were confronted by riot police barring them to continue the street march. Disgruntled participants sat on the road to protest against the barrier. Circumventing this blockade they eventually backtracked and took an alternative route to continue their march. However at a crucial traffic junction downtown protesters were again prevented by police to carry on. Eventually three individuals including Curtis Hofwijks, leader of the protest movement ‘We are fed up’ and Bryan Boerleider from the ‘People’s Collective’ were arrested and detained.

The crowd subsequently dispersed and after the formal closing of the protest, Wilgo Valies, president of the Teacher’s Union, was arrested by police officers after he held a speech calling citizens to join fresh protests on Wednesday. “If we accept that individuals who are demonstrating peacefully are being arrested and detained by the authorities we open the flood gates for dictatorship”, the union leader said. According to District Commissioner of Paramaribo, Mike Nerkust, organizers of the protest didn’t have a permit. “They didn’t even seek one, which led to the conclusion that the organizers were aiming for chaos and disturbance of order and peace”, Nerkust said on state-owned Radio SRS. He added that if organizers apply for a license the police force would provide security during the march in order to prevent calamities and keep the order.