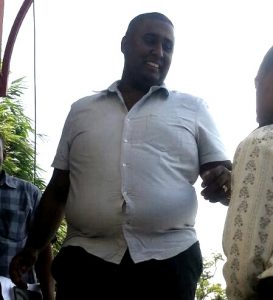 Constable David Singh as he left the Georgetown Magistrates’ Court.

A policeman, who is charged with two counts of fraud, is still on duty and he was released on GYD$30,000 bail.

Police Prosecutor, Alvin Moore told did not oppose the granting of bail to 42-year old Constable David Singh who is attached to the Tactical Services Unit (TSU).  He said the policeman was still performing duties at the police force.

Appearing before Chief Magistrate, Ann Mc Lennan, the policeman denied that on January 26, 2017 at Penny Lane, South Ruimveldt Gardens, Georgetown with intent to defraud he falsely pretended that he would pay GYD$6,000 for hiring a motorcar from Troy Jacobs for 40 days, knowing same to be false.

Singh, of 1246 Eccles New Housing Scheme, is also accused of receiving GYD$400,000 from Rajendra Harricharran, property of Latchman Mohabir, and fraudulently converting the cash to his own use and benefit

Defence Lawyer, Patrice Henry asked the court to release the policeman on self bail. He told the court that his client has already reimbursed the cash.

The Chief Magistrate instead granted GYD$15,000 bail on each charge and ordered that Singh return to court on April 20, 2017.