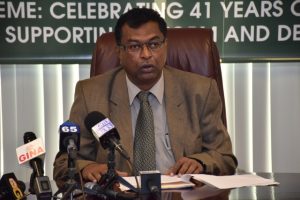 Minister of Public Security, Khemraj Ramjattan, Wednesday said that the 911 emergency telephone line is one step closer to being fixed.

The Minister noted that clearance has been given to Digicel (Guyana) Limited to ship the equipment needed to have the 911 system back up and running. “Digicel won the contract for purposes for getting the equipment to be installed in Brickdam and I think the arrangements have already been made with the PS (Permanent Secretary) for the monies to be given to them to get the equipment in,” the minister was quoted by the Government Information Agency (GINA) as saying.

Ramjattan pointed out that once the equipment arrives in Guyana, both the 912 and 913 emergency lines will be merged with the 911 number to have one cohesive emergency calling system.

It was announced recently by Minister of State Joseph Harmon that Digicel was awarded a $27M contract for the installation of the ‘911’ emergency service.

Government hopes that the intervention will resolve many of the problems experienced by persons attempting to use to ‘911’ system emergency line.

Guyana Telephone and Telegraph (GTT) will be contributing to fixing the distribution line at the Brickdam Police Station, he said.

Ramjattan noted that there were some problems with the telephone lines and the equipment. He said these should be resolved in and around the time when the equipment comes in.

Minister Ramjattan explained that officers have already been trained to answer the emergency calls.