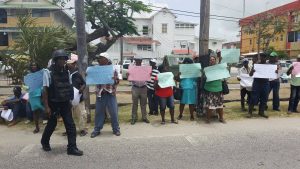 City Council workers protest against the General Secretary of the Guyana Labour Union, Carville Duncan outside the union’s headquarters on Camp Street, Georgetown.

“Let him go! Let somebody else take over the union and let the people get justice,” Field Officer, Urma Glen told Demerara Waves Online News outside the GLU’s office on Camp Street, Georgetown. Fellow Field Officer, Michael Stephens, who has still not been paid for last month, accused Duncan of operating like the “alpha and omega” in the absence of the national executive council since last year. “Anything happens, there is nobody to complain to; he just does what he wants. Is the union his own or the people’s own?,” he said. 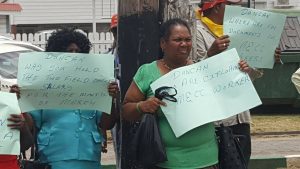 The GLU had been historically close to the People’s National Congress Reform (PNCR), with its party leader being the President-General until Duncan spearheaded then party leader, Robert Corbin’s removal in 2007.  Duncan has over the years become rather close to the now opposition People’s Progressive Party (PPP), Guyana Agricultural and General Workers Union and the Federation of Independent Trade Unions of Guyana (FITUG) which have all bee critical of the APNU+AFC coalition government.

Two field officers said they have been not been paid their salaries for March because they failed to submit a report on their attendance and performance. The City Council workers, for their part, said Duncan has failed to facilitate their transition from temporary to the fixed establishment so that they could receive pensions.

Glenn expressed concern that the GLU President instructed that she must not be paid. “I need my salary because I have my grandchildren, I have my great grands. I have things to do with my money,”  Glenn, a former  GLU President, told Demerara Waves Online News.  “He is a total failure! He is a man I had respect for but I lost that confidence in him. He overdo the thing so he hustling now to done all his cases so he can jump on the plane,” said Glenn, a former Duncan ally.

The Field Officers said they have already lodged complaints about the non-payment of March salaries with the Ministry of Social Protection’s Department of Labour.

Apart from the two GLU Field Officers, City Council’s temporary workers complained bitterly that the GLU President has been foot-dragging on making arrangements for them, numbering about 300, to be transitioned to permanent status. “We need to go on the fixed establishment because it is really stifling us. One section getting the benefits and the other section is not,” he said.

The workers said when they reach retirement age, they are told that they could only receive the highest amount of money-either the pension scheme contributions or gratuities depending on which is more. Currently, they contribute just over GYD$3,000 monthly to the pension scheme and GYD$1,040 as monthly union dues. “Labour passed this thing, we are only to have fixed establishment.  He keep telling us that he is looking it after. I was reliably told that all the files and agreements that he had with the Labour Ministry cannot be found,” the worker said.

Due to legal troubles in his capacity as a former board member of the Guyana Power and Light, Duncan has been removed from the Public Service and Judicial Service Commissions.