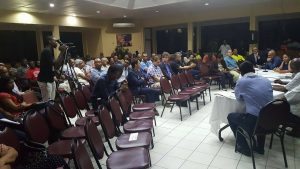 Mixed views were Friday night expressed about the importance, extent and approach to reforming Guyana’s constitution at a forum organised by the Carter Centre and supported by the United Kingdom (UK).

The forum, which was held at the Education Lecture Theatre of the University of Guyana, heard calls from the floor for electoral reform to allow for constituency representation instead of proportional representation that entrenches the political parties and the list system.

There were also recommendations for existing rights commissions and other constitutional provisions to be activated because there was no major need for constitutional reform. 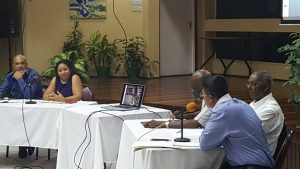 Ramkarran repeatedly called out the governing A Partnership for National Unity+ Alliance For Change (APNU+AFC) coalition on its failure to keep its electoral promise to advance constitutional reform within the first 100 days in office. However, Ramkarran said after two years nothing has been done except President David Granger citing the need for countrywide consultations and the budgetary allocation of GYD$80 million in this year’s budget for the hearings.

The former House Speaker argued against holding another round of extensive hearings because coming out of the 1999 process there were 4,000 submissions that yielded hundreds of recommendations in 23 separate areas of the constitution and 10 pieces of legislation. “I would not recommend a large scale process. I would recommend a process that focuses on the APNU+AFC’s manifesto and they have to engage their political opposition because th process cannot work without the political opposition,” he said in reference to the coalition’s manifesto promises that the Prime Minister would be drawn from the party with the second highest number of votes and the inclusion of any party in the government once it wins 15 percent or more of the votes.

Ramkarran, a former executive member of the opposition People’s Progressive Party (PPP) with which he fell out, said one of the major stumbling blocks is finding a way for that party to hold talks with the governing coalition through its envoy, Prime Minister Moses Nagamootoo, also a former leading PPP member. “I don’t know how the dilemma of having Moses, as Prime Minister, speaking to the Opposition- I don’t know how that will be resolved but I hope it is because they are reluctant to speak with him,” he said.

Speaking from the floor, businessman, Terrence Campbell disagreed that the 1999 constitutional reform process yielded comprehensive reforms, saying that the Proportional Representation electoral system, imposed by Britain and the United States in 1964 ahead of independence in 1966, merely entrenches the PPP and the People’s National Congress Reform (PNCR). “That system does not allow for individual accountability of any politician and we have had politicians, including politicians in this room who have done things, that if they had to face their own constituency they probably never have done it,” he said. We also have a list system which keeps those politicians in line,” he said. Campbell also voiced concern about the behaviour of politicians who make remarks and are not held accountable for their actions.

Attorney-at-Law Persaud-who was a member of a Steering Committee on Constitutional Reform that submitted its report to Nagamootoo in April, 2016- argued that constitutional reform should only be seen as part of the solution to deep-seated ethnic or race-based politics which has retarded Guyana’s growth for several decades now before and after independence from Britain.

I don’t think serious constitutional reform is the solution- Guyana is a complex country; the solutions are many-but can be  a partial solution to some of the serious problems that we have been faced with. The bigger solutions have to be political solutions, not necessarily not only legal solutions,” he said.

Mohammed disagreed that Guyana has a race problem and she proposed that efforts must be made to disseminate information at all levels. “I do not buy the idea that the problem that we we have in Guyana is really about race. I have always believed that it is about power and it is about class and that it’s the race is being used as a vehicle for people to kind of structure the relations that benefit some groups or not political power,” she said. Mohammed went on to point out that there is an increasing number of Guyanese who are of mixed ancestry and no single race group can boast of having a majority.

She recommended a closer understanding of how the masses think and how the country is working, how the problems can be fixed and why constitutional reform surfaces and dies around election time.

Alexander, a former executive member of the PNCR, said “the ethnic question is real” in Guyana’s political landscape because of antagonistic relations among ethnic groups dating back to the arrival of Europeans and the bringing of slaves and indentured labourers. “That is the root causal factor of where we’re at and, therefore, we cannot ignore the history because the industry is in us because of the different psyches we carry around based on our historical experiences and our learnt behaviour,” said Alexander.  He argued that constitutional and legal engineering and structures could play  a meaningful role in uniting and homogenizing the society.

Lachmansingh said the focus needs to be on making Guyana’s constitution a development tool at a time when Guyana is “dialogue-fatigued” and there have been protests against various issues. He said the major problem facing Guyanese is the breakdown in a number of system. Our people want the systems to work, they want things that they are paying for through their taxes to deliver some kind of public value…,” he said.

The panelists largely agreed that Guyanese needed to consider the past dating back to racial friction before and after independence.

Coalition-aligned activist, Malcolm Harripaul contended that the socialist constitution imposed in 1980 gave dictatorial powers to the President and political parties. “Today, we are seeing it more and more where the parties are the ones who are being given power in this country, not the people of Guyana. That socialist constitution was created to give power to the maximum leader and to the political party,” he said. Harripaul recommended that Guyana reverts back to the independence constitution or the removal of dictatorial powers from the constitution.

Responding, Alexander recalled that a system had been created to temporarily provide for a constituency system and a small number of seats to equalise proportionality. Since then, he said the politicians have failed to advance that process. “We have not had the political will after 2001 elections to go back to something- if you check the reports- says we were to go back to and fix,” he said. “The physiology will change significantly indeed if we had constituency politics and we use the top-up approach to make sure we don’t have ethnic dominance or a one-party dominance,” he said.

After Alexander reiterated that the electoral system for this plural society is flawed, Ramkarran said it would be rather easy to adapt the 32 constituencies that had been used in the 1961 general elections if the opposition and government could find a mechanism to “encourage that conversation.”

“The constitution provides for a mixed first past the post and proportional representation  but it needs a law to activate it.. so there is a law already so it is not a big problem.. it is something which is doable and easily doable,” he said.

General Secretary of the Guyana Trades Union Congress (GTUC), Lincoln Lewis said Guyana’s constitution has been hamstrung by poor or non-existent implementation of several provisions such as the re-establishment of the Ethnic Relations Commission, the appointment of the Human Rights Commissions and the re-appointment of the Public Service Appellate Tribunal for the first time since the 1990s. He said “not one piece of legislation” seeks to enforce the constitutional provision for an inclusionary democracy.

“If the basic things that the Constitution says are not being implemented by the politicians, is the constitution bad..All that we need are laws to strengthen these things and we are not doing them,” said Lewis who clashed a several times with the moderator over the need to speak.

Alexander highlighted the importance of preventing the politicians from removing or altering key recommendations by the public such as the need for a return to village councils, a 100 percent constituency system at the local government level and no formal political party should contest the local polls. “What we need to find is a mechanism that would avoid the tinkering that took place and allow the views of the people to come to the fore,” he said.

ACDA’s Executive Member, Eric Phillips said Guyana’s constitution is “incompatible with our vision” reflected in the country’s motto. “We can never have sustainable development with this constitution. It’s a lousy constitution. It needs to be changed,” he said. Phillips recommended that the constitutional reform should result in socio-economic and political equity. “The constitution has to frame that and it if it framed properly, behaviour will change,” he said.

Phillips said that process should be led by civil society because the politicians have failed.

Alexander said a constitution should provide a framework for individuals and groups to enjoy Guyana’s “largesse” and allow individual, family and communal and national rights to be enjoyed fully by all.  In that regard, he suggested a transition period in which we seek to “redress while we address.”