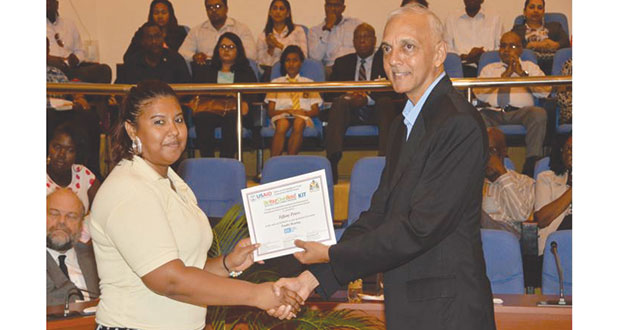 After attorney-at-law Latchmie Rahamat accused police prosecutor Deniro Jones of perverting the trial for Tiffany Peters, who was pardoned by President Granger in 2016, the police prosecutor made a counter-accusation that Rahamat tampered with his witness.

Corporal Jones, today, March 28, told Chief Magistrate Ann McLennan that he, along with a number of other police ranks, observed Rahamat engaging with one of the prosecution’s witnesses on March 22.

When asked whether an official report had been made to the police, Jones responded in the negative. Instead, he said he was advised by his lawyer to bring it to the attention of the court first.

Jones then went on to withdraw an application to tender a statement to the court which was a copy of a certified copy of attachments made by Police Lance Corporal S. Bridgehall, when he gave evidence. Latchmie had raised concerns about the uncertified copy being submitted as evidence.

Jones withdrew the application in the absence of Peters’s attorney, Rahamat, who was reportedly at the High Court tending to other matters.

The prosecution called three witnesses in the trial for Peters today, who was accused of stealing some $1.127million from the Georgetown Magistrates’ Court in 2012, while she was employed there.

Peters had been imprisoned in 2015 for a similar charge, and was pardoned last year during President Granger’s amnesty. Since then, the 24-year-old former Magistrate’s Court clerk was placed into the USAID SKYE programme, where she started a business in poultry farming.

Peters was also a beneficiary of government’s Youth Employment and Entrepreneurial Strategy (YEES) programme in August 2016.

Some time late last year when Peters attempted to obtain a police clearance from the Criminal Investigations Department (CID), Eve Leary, she was once again held, and new charges brought against her.

Harilall seemingly put Jones on the spot when he was asked about a summary and report which were produced following the 2012 investigation at the court’s collection office, which saw Peters imprisoned.

When Jones inquired if Harilall had signed the report, Harilall responded that he signed it upon the direction of the police prosecutor Deniro Jones, since the 2012 report should have been signed.

An allegation was made against Jones by Attorney Rahamat, during the last trial hearing, that he instructed the Chief Accountant to sign and backdate a number of documents, while Lance Corporal Bridgelall was providing evidence before the court.

The observation was made by Rahamat’s colleague, attorney-at-law Leslie Benjamin. Rahamat told the court on March 22 that her colleague observed a gentleman outside signing documents, after which the documents were brought inside and given to Jones, while Lance Corporal Bridgelall was on the stand.

Harilall told the court that the summary and report of the investigation show March 22 as the date when his signature was placed. There was no mention of the year in court.

The police prosecution tendered the documents used in the audit, which were provided by Chief Accountant Harilall, for identification purposes. The court saw a catalogued stockpile of receipts and cheque stubs, which would later form part of the evidence against Peters.

The matter will come up again on April 4, where Peters’s defense attorney(s) will cross-examine the prosecution’s witnesses.