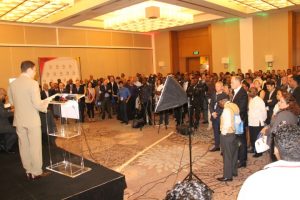 Deputy Chief of Mission of the US embassy here, Terry Steers-Gonzalez addressing the opening of Guyana Oil and Gas Conference.

The United States (US) on Sunday said Guyana’s proposed Sovereign Wealth Fund (SWF) should be set up and governed in such a manner to ensure it is free from interference and cannot be violated- something government said it is well on its way to doing.

Addressing the opening of the inaugural Guyana Oil and Gas Conference at the Marriott Hotel, Deputy Chief of Mission of the US embassy here, Terry Steers-Gonzalez identified the importance of Guyana setting up a transparent, independent, inviolable sovereign wealth fund to manage oil revenues for long-term national development. “To put it bluntly, revenues can be fleeting, whether coming in or going out. That is why the establishment of a comprehensive sovereign wealth fund is the cornerstone of, or crown jewel, in any new oil and gas regime.

A sovereign wealth fund will provide Guyana with the opportunity to invest in its long-term future. Prudent management of incoming revenues will ensure that outgoing investments by the government in its people do not simply last for as long as oil is pumped out of the ground, but beyond that, through the creation of diverse new industries and projects,” he said.

Minister of Natural Resources, Raphael Trotman said a National Sovereign Wealth Fund Bill has been drafted and “has all of  the features which Ambassador (Terry Steers-Gonzalez) spoke of.” Trotman assured that a cabinet sub-committee has been established to include all stakeholders in developing preparing Guyana to take advantage of the oil and gas industry. “We propose at the same time with industry and civil society organisations to examine the means through which we can create a more inclusive platform for the exchange of views and ideas,” the minister said. 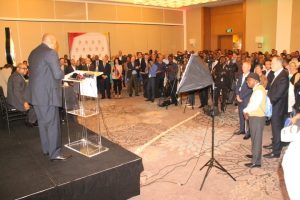 Minister of Natural Resources, Raphael Trotman addressing the opening of the Guyana Oil and Gas Conference

The American diplomat urged Guyanese stakeholders to think strategically on how best to invest earnings from oil sales in a range of development projects such as renewables and energy independence, quality education and health services, physical infrastructure and citizen security that will create jobs. “These are among the areas that will create significant job numbers, not local content in the off-shore operation,” he said at the two-day event organised by the Guyana Oil and Gas Association (GOGA).

The US Deputy Chief of Mission pledged his country’s  continued “counsel and assistance” in supporting Guyana’s efforts to build industries – not just petroleum – that are transparent, responsive, and accountable to all.  He said the role of the private sector, government and civil society will be integral in shaping Guyana’s future.

In addition to recognising the “great achievement” of the administration of President David Granger in collaborating with Guyanese and international operators and investors to create the climate for those advances and promoting the principles of the Extractive Industries Transparency Initiative (EITI), the senior American diplomat congratulated the Minister of Natural Resources in following through on his commitment to put forward draft legislation soonest on oil and gas, and in a manner that includes all stakeholders.

In his address to the opening of GOGC, Minister Trotman said raft of legislation and policy drafts and updates including an update of Guyana’s national upstream petroleum sector policy, creating a national local content policy, revising model production sharing agreement with assistance from an international law firm, updating the 1986 Petroleum, Exploration and Production legislation and accompanying regulations, drafting and consulting for a Petroleum Commission of Guyana Bill, the eventual setting up of a Petroleum Scientific Institute and establishing a national oil company by 2018.

In 2020, ExxonMobil intends to begin pumping some of the 1.6 billion barrels of oil discovered offshore Guyana at the Liza and Pyara wells. Minister Trotman confirmed for those in attendance that the administration is currently processing Production Licence for ExxonMobil in addition to Exploration Licences for other companies looking to invest in Guyana oil sector.

Industry elites in the Oil and Gas sector from across the world have converged in Guyana for the two-day networking conference and exposition. The inaugural conference is organized by the Guyana Oil and Gas Association (GOGA) and saw in attendance a wide cross section of stakeholders across the political divide, the private sector, civil society, the diplomatic community and business giants Halliburton, Eco Star and others.

The Minister of Natural Resources cautioned that “all that we do has to be bracketed by a set of considerations that reminds us to be cautious as we go about our preparations recalling that there are those with vested interest in seeing us failing us as a nation and within our society there are as many cynics are there are optimists.”

He said Government will be rolling out very an outreach programme dubbed “Guyana rising: From potential to prosperity,’ to collaborate with stakeholders including operators and civil society in developing the industry.

According to Trotman, the successful development of the industry will require an inclusionary approach.
“We require a whole of government, whole of industry, whole of society, and whole of country approach.”

Dubbing 2017 the year of ‘implementation’ Minster Trotman, reminded of some of government’s undertakings in the industry. “We are considering a proposal from one of the world’s leading offshore companies to establish a world class base at Crab-Island Berbice.”

Government, he said, is examining the possibility of utilising some of the available natural gas from ExxonMobil’s Liza field for energy generation as Guyana transition towards the greater use of renewable.

The Inaugural Oil and Gas Conference brings together, in addition to the international exhibitors, several local companies including banks, insurance companies along with other service providers and manufacturers in order to provide networking opportunities ahead of ExxonMobil’s imminent move towards commercial production.