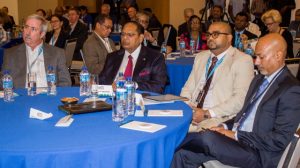 Guyana’s oil money is not for vote buying come election time by any administration in office. As such, the coalition A Partnership for National Unity, Alliance for Change (APNU-AFC) government is uncompromising in “the avoidance of sleaze and malfeasance in public office,” as evidence by recent proposals to amend the country’s Integrity Commission laws.

Prime Minister Moses Nagamotoo, made the declaration today (March 27, 2017) as he addressed the inaugural Oil and Gas Conference which got underway in earnest for its first working session at the Georgetown Marriott Hotel.
Resource Curse
Against the backdrop of putting in place mechanism—legislative and otherwise—to guard against the ‘resource curse,’ Prime Minster Nagamootoo, told those in attendance “We have to look at our oil and gas resource with regard to the nature of governance we have in our country.”

Turning his attention to the establishment of a Sovereign Wealth Fund (SWF) to treat with the management of the oil (and other) revenues, Nagamootoo declared “we like our resources to spread into the future and not just be gobbled up by any administration that would feel the resources could be deployed for short term gains or buying votes…it must not transform into votes.”

Pointing to what he called the recent ‘furor’ that has erupted over the proposed legislative code of conduct for government Ministers and Holders of public office, Nagamooto said “we are uncompromising with regards the avoidance of sleaze and malfeasance in public office.”

Nagamootoo told those gathered for the networking confab while it is understood there would be resistance by persons in public office, regarding the declaration of their assets, the APNU-AFC administration is keen on ensuring an effective governance system in place to guard against back door deals and side agreements.

According to Nagamootoo, “we endorse fully that a portion of the proceeds should go towards; one the future of the country to be invested in the development of strategically necessary resources infrastructure and health of our people and not just be accessed willy nilly as opportunities present themselves to Government.”

He used the occasion to also caution those involved in the networking conference between investors, potential investors and operators to guard against the vagaries associated with the industry.
According to Nagamootoo, a significant responsibility on the shoulders of the administration is in its dealing with “organizations that come to tell us how it ought to be done.”

Local Content
Prime Minister Nagamoootoo, was also quick to point out while we feel very elevated in the world arena to be described as new frontier of Oil and Gas, government is conscience of the fact, “while we speak of local content, the industry will not provide employment at the level that will cater for the needs of young people, so we have to look at how we develop an integrated economy.”

He reminded that Guyana’s traditional pillars of the economy—rice and sugar—have been facing dire straits in recent years underscoring the need to utilize Guyana’s oil resources to diversify the economy.

The two-day conference is organized by the Guyana Oil and Gas Association (GOGA) under the theme, ‘The initiation of a transformative industry’ with more than 23 local and international exhibitors showcasing their products and services.

GOGA Chief Executive Officer, Bobby Gossai Junior in welcoming participants to today’s working session of the inaugural conference outlined that the presentations papers and discussion will focus on technology for offshore development, environment regulatory and safety standards, experience from other territories and business opportunities for development in Guyana.