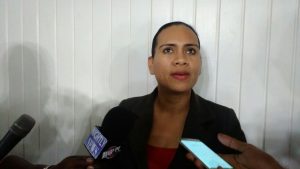 Linden Town Clerk, Jonellor Bowen, was today (March 23, 2017) fired with immediate effect by Minister of Communities, Ronald Bulkan, having already been cleared of any wrong-doing recently as documented in the conclusion of a recent Commission of Inquiry (COI).

A visibly distraught Bowen, spoke with media  today while at Freedom House—where she had met with and sought the assistance of Opposition Leader, Bharrat Jagdeo—and said she was at a loss as to the reason for her dismissal.

According to the dismissal letter seen by Demerara Waves, addressed to Bowen and dated March 23, 2017, “please be informed that your appointment as Town Clerk of the Linden Mayor and Town Council is hereby revoked.”
Bowen was also instructed by the Communities Minister to turn over all assets and other relevant documents to the Deputy Town Clerk.

“He (Permanent Secretary) indicated to me that what I have in my hand is a letter and he wishes me well,” at which point Bowen said, she was informed that she could no longer be a part of the seminar.

The now former Town Clerk said while she is still mulling over her options, seeking legal redress has not been ruled out and that the letter did not give a reason for her appointment being revoked.

According to the letter seen by Demerara Waves, Minister Bulkan only cited the section of the legislation authorizing the action with regards the Town Clerk’s appointment.

She said, “at this point I will ask for advice on the way forward…” Pressed further on her thoughts regarding the sudden dismissal, Bowen maintains that she was cleared of any wrong doing by the COI and was reinstated on March 1. She did report there had been several verbally abusive conflagrations allegedly triggered by Linden Mayor Carwyn Holland.

Bowen told media operatives during a recent meeting she had with Holland, an administrative matter was raised and she offered her advice according to her remit “but he started raising his voice at me,” using condescending language before chasing her out of his office.

Questioned on accusations raised, that the action on the part of the Minister was as a result of her not wanting to take part in any illegalities at the council, the now fired Town Clerk told media operatives, “what I would want to say is that there are things that are not being done based on the Act (law).”

Bowen said ever since returning to work on March 1, at least five other female department heads have been complaining—some in writing, “about the abusiveness and disrespect of the Mayor.”

This, she said, is a matter that has been raised at the level of the Ministry of Communities and she would have advised that it be dealt with by the Administrative Committee of the Council but this is yet to bear fruit.
According to Bowen, the written complaints against Mayor Holland speak directly to his treatment of the female department heads at the Municipality.

Bowen who served as the Linden Town Clerk from July 2012 said she is still contemplating her future actions which would be guided by advice but has not ruled out court action.