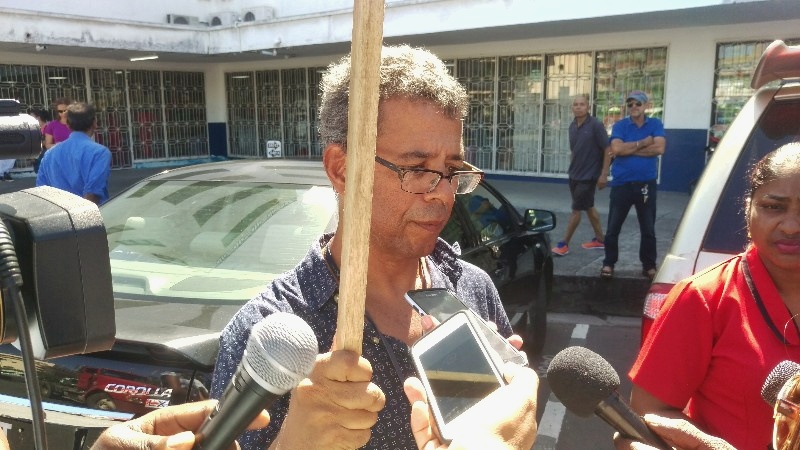 One of the organisers of the protest outside Muneshwers, Marcel Gaskin

Although government previously maintained that Cabinet had reviewed and approved of the Georgetown bylaws for the parking meter regime, a new position has been made that a number of streets, where parking meters were placed, were actually controlled by central government and not city hall.

In support of the statement of Public Infrastructure Minister, David Patterson, said a number of streets, including Water Street, were under control of central government and not the city.

A position which acting Georgetown Mayor, Sherod Duncan, agrees with. Duncan, standing on the protest outside Muneshwers Limited on Water Street.

Duncan said the contract can be suspended if there are frustrations or avenues that neither parties have foreseen. “For example,” Duncan said, “government stepping in.”

“I don’t see why the town clerk has written to minister Bulkan. As acting mayor with all powers conferred on me, I am saying we should go ahead and suspend the contract,” Duncan told Demerara Waves Online News.

Marcel Gaskin, one of the organisers of the mid-afternoon protest, said there is no indication as yet that City Council has taken the advice of the administration to suspend the contract for three months.

Gaskin said this shows clearly that the bylaws were not clearly thought out and that there was no proper review process.

Although Duncan is acting as Mayor since Mayor Patricia Chase-Green is out of the jurisdiction, the power to place agenda items on meetings of the Council rests with Town Clerk, Royston King, according to the Municipal and District Council’s Act, Chapter 28:01.