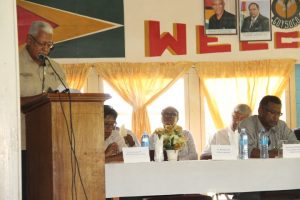 A meeting between top government ministers and Wales Sugar Estate workers on Friday erupted into a raucous session, despite repeated assurances that their main demands for severance pay would be addressed by government.

“We are not here to simply make things written in stone. We are going to take all of that… and we are going to take it to the relevant authorities and one of those big authorities is  Cabinet,”  Minister of Public Security, Khemraj Ramjattan told the packed room of attendees. “I rather suspect that all that we have seen here is going to be taken back with the sentiment that major decisions would have to be made,” he said.

Calm was restored one hour later after the boisterous workers, who were backed by a local representative from the Guyana Agricultural and General Workers Union (GAWU)- walked out of the meeting that was held at the Wales-Patentia Community Centre. They were moments earlier further incensed by a woman’s call for police to be asked to deal with those were disruptive because other persons wanted to raise different concerns.

After the aggrieved workers left, other issues such land for school farming and recreational facilities as well a more appropriate school curriculum, and the need to gainfully engage youths to reduce drug use and teenage pregnancy were raised. Also discussed during that segment was the need for government to provide seed financing to farmers. 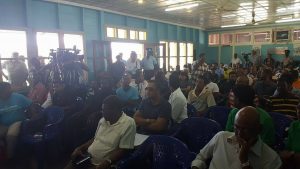 A section of the attendees at the meeting between government ministers and Wales Estate sugar workers.

Minister of Public Telecommunications throughout the first hour constantly appealed to the group to maintain order and she assured the vociferous group of workers that their grievance- mainly the non-payment of severance- would be addressed. “Hold on! Hold on. We want this meeting to be productive,” she said. “We ain’t going to get anywhere if we can’t speak one at a time,” she begged. Hughes said GYD$32 billion have been ploughed into Guysuco in the last two years.

Public Security Minister Ramjattan, who is chairing a ministerial committee for the restructuring of the highly indebted and low producing Guyana Sugar Corporation (Guysuco), was at pains to explain to the workers that government could not afford another GYD$375 million to pay more workers who now said they wanted to be paid off for the years of service instead of taking up offers to work at the Uitvlugt Estate. He said government has already paid GYD$339 million in severance to  a number of Wales Estate workers.

When Ramjattan warned the workers that “if you take severance and don’t go to Uitvlugt, it would mean necessarily  that Uitvlugt is also going to collapse if the workers don’t go there,” one worker muttered “We nah kay bout dah (we do not care about that).” 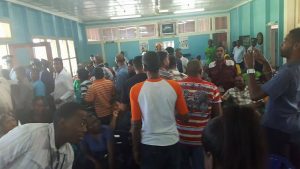 Wales Estate Workers walking out of a meeting with government ministers and Guysuco officials at the Wales Community Centre.

A lawyer by profession, Ramjattan said the High Court would ultimately decide whether distance should be also used to calculate severance pay and he pledged that if the workers win the case government would pay up. “We are going to respect the court’s decision- this matter in relation to whether severance should be paid in the context of the distance…and if the court rules that ‘well fine, we got to pay the severance’ you rest assured that this government…we will pay, if we got to borrow money, we have to pay,” he said. He cautioned that there would be financial implications to the extent that the payout could dent the economy.

One worker noted that at that time Ramjattan had been in the forefront fighting for Diamond sugar workers, and another add that now he and the rest of the government have given themselves a 50 percent pay increase since coming to power in May, 2015. “The government don’t have money but the government could find 50 percent to pay itself,” he said. Ramjattan remarked that the 50 percent amounted to GYD$28 million “or whatever bass. This is nothing compare” to the GYD$375 million in severance pay to 389 persons.

Minister of Agriculture, Noel Holder said of the 675 workers at Wales Estate, 374 are required for harvesting at Uitvlugt Estate, West Coast Demerara. He said 54 have been transferred to other estates

Several of the more vocal workers were perturbed that since Wales Estate was shut down in December, 2016 no one from the government had gone to speak with them. “Since December, boss nun badee like you neva come and siddung pun a chair or come pun d grung and talk wid ahwe. None! (Since December, boss , nobody like you never came and sat down on a chair or came on the ground and talked with us. None!),” the worker stated.

A GAWU workers’ representative appealed to government to peacefully pay severance instead of taking the dispute to Court. “We don’t want to go to court. That is a a long drawn out process. If the workers don’t get their severance. We are going to continue to protest and protest and be agitated…If we don’t get rid of this severance things will not go nice so what we are asking for peacefully use your good office and let the people have their severance. ,” he said.

Another worker questioned why government did not pay off workers and close down the ailing Guysuco into which government is pumping billions.

On the issue of fewer than deducted social security contributions to the National Insurance Scheme, Minister Hughes promised that government would ensure that Guysuco pays the NIS. “I have said publicly that it is in the law and Guysuco will have to ensure their NIS payments are credited to all the workers,” she said.

The specific group of disgruntled and vocal workers appeared as though they went prepared to discuss only one issue-severance- and up to when they walked out did not show any interest or ask any question about Minister of Agriculture Holder’s announcement of a diversification plan for Wales Estate. Ramjattan let his dissatisfaction be known. “I am a little disheartened by the fact that everybody seems  so total with this severance payment rather than with other options…there are options with lands,” he said.

The meeting descended into chaos immediately after a woman suggested that the police be summoned to ensure that there is order and allow attendees to raise concerns other than severance.

The Minister of Agriculture announced that the diversification programme entails an impending agreement between the Guysuco and the Guyana Rice Development Board (GRDB) in which the Board would fund a seed paddy project. “As soon as the land dries out over the next few days, land preparation will commence. Contrary to what is being said, the country is in  great need for good quality seed paddy and we are looking to Guysuco to produce this,” he said.

Another aspect of the diversification plan for Wales, he said, would entail an aquaculture pilot project by April as well as a number of viable non-sugarcane crops and livestock activities.

Holder also announced that land would be leased to employees by October, 2017 to shift them into becoming farmers “to be more in control of your destiny, to give you a greater stake in the wealth to be generated in the community.” He said  a European Union-funded study would shortly be undertaken.

The Agriculture Minister said says 60 percent of the canes that previously went to the Wales sugar factory will now be milled at Uitvlugt. “These farms are in fact closer to the Uitvlugt factory and the farmers would benefit from reduced transportation cost as well as better recoveries,” he said. Holder said bad weather has been hampering the construction of an all-weather road and bridges from Wales to Uitvlugt.

He also said land closer to Uitvlugt would be made available to farmers who would like remain in cane farming. Already 14 such farmers, he said, have been awarded leased land close to Uitvlugt and other applications are being evaluated.  The Agriculture Minister said farmers who opt to remain at Wales, where they have their farms , but find it uneconomical to remain in cane would be encouraged to diversify in line  with the diversification plans for Wales.