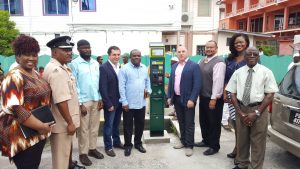 Top officials of the Georgetown Local Government system and Smart City Solutions near one of the parking meters that has been installed across the city.

Minister of State, Joseph Harmon on Friday hinted that the contract provides for Smart City Solution to halt parking meter operations, if City Hall does not heed Cabinet’s call for a 90-day suspension of paid parking.

Quite hopeful that the 30-member Council would support Cabinet’s desire to put a brake on the system of paid parking to allow for renegotiation of the contract, Harmon said there is legal room through force majeure ((occurrences beyond the reasonable control of a party) for the suspension of the contract to allow for its renegotiation in the wake of several concerns by government and the public.

“There are two options: one is suspension, of course the  other is revocation and if the intervention of a party under what might be termed force majeure exist, then certainly the parties to the contract can understand what needs to be done and the contract spells out itself in clear terms what force majeure is and what needs to be done,” said Harmon, a lawyer by profession. He added that if the Mayor and City Council and SCS do not agree, there is provision for arbitration.

Against the background of concerns by Town Clerk, Royston King that the contract between City Hall and Smart City Solutions does not provide for suspension and can result in City Hall having to provide costly compensation, he said the two sides would have to address that.  “Those are legal issues which will be dealt with but the government made its concern very clear and, therefore, whether there is to be compensation or not that’s a matter to be addressed in the process,” he said.

The Minister of State said government expects that City Hall would heed its advice and take the matter to 30-member council for ratification and subsequent communication of the elected body’s decision to SCS. “Cabinet has given its advice and we expect that the advice will be heeded by the City Council,” he said.

Harmon said government is concerned that parking meters have been installed on some streets that are within the jurisdiction of the Ministry of Public Infrastructure, SCS has used parapets that are not under City Hall’s jurisdiction, and that there has been no provision for the parking of police, fire and ambulatory services in areas of Georgetown.  Government has since listed the several streets and roads in Georgetown for which it is responsible and SCS and City Hall have no authority to erect parking meters.

The contract says police, fire, medical and ambulances are exempt from parking meter fees only when the vehicles are parked in metered parking spaces in emergency performance of their  duties.

He added that Cabinet also registered its concern about the cost of parking, the financial arrangements of the project, the need greater involvement of stakeholders in the process, and concerns expressed by citizens of Georgetown and Guyana generally. “It was felt, must be taken into consideration. In fact, it was  a very strong view of Cabinet that the concerns of citizens always must be taken into consideration in these matters,” he said. For six weeks now, each Thursday hundreds of persons have been holding a silent one-hour protest outside City Hall calling for the revocation of the contract because of a lack consultation, exorbitant fees, and other burdensome conditions.

Up to Thursday, Town Clerk Royston King appeared resistant to central government’s desire for a temporary halt of the contract, saying that it will open up the council to costly legal action and compensation and at least 60 persons would lose their jobs.

SCS has invested US$10 million in the project.

2017-03-17
Denis Chabrol
Previous: Govt outlaws parking meters on Water Street, other streets
Next: Ex-soldier charged with alleged rape of teen girl at military base, gets $600,000 bail