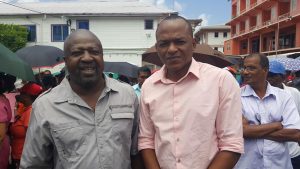 Georgetown’s Town Clerk, Royston King on Thursday wrote Minister of Communities, Ronald Bulkan strongly suggesting that suspension of the parking meter contract with Smart City Solutions (SCS) will be impossible, in the wake Cabinet’s decision to ask the municipality to halt the deal for the next three months.

The Town Clerk is said to have cautioned the Minister that if the contract is suspended, City Hall would have to pay for breach of contract and that Council could not accept the wide-ranging legal, financial and other fall-out. The Mayor and City Council has a 20 percent stake in the US$10 million project and SCS 80 percent.

Government wants the contract renegotiated to ensure that is more acceptable to the public which has been largely boycotting the parking meters, resulting in just over GYD$250,000 going to City Hall during its first month of operations.

Demerara Waves Online News was told that the Town Clerk has asked the Minister of Communities for “more clarity” about Cabinet’s decision so that the 30-member Council can adequately address the matter. Sources said King told Bulkan that the contract between City Hall and SCS does not provide for a partial or full suspension of the project. He said if the project is put on hold 60 persons could be put on the breadline and the municipality would lose much needed cash.

Up to Thursday afternoon, Acting Mayor Sherod Duncan said Bulkan did not formally communicate Cabinet’s desire for the contract to be suspended to allow for consultation and reconsideration of the contract to address several deficiencies identified in reviews by the Finance Ministry and the Attorney General’s Chambers. Duncan said he and Bulkan have been in contact informally and, in the absence of a letter, he believed the minister’s word is good enough to act on. “In my view, the Cabinet’s is clear and I would advise that the Council accepts the decision of Cabinet  and that we seek to ratify that through our Council. I think a minister’s word still has a lot of value. We have nothing to dispute what the minister is saying,” he told Demerara Waves Online News.

Bulkan has not returned calls made to his mobile phones or responded to messages on the matter since Wednesday.

One of the top organisers of the Movement Against Parking Meters (MAPM), Marcel Gaskin has since said the whole affair amounts to “stalling”. “That will be stalling, I guess, on his part because he knows what the deal is. He knows that Cabinet has said suspend this thing for three months. The fact that he is writing for clarity, I don’t know what more clarity he wants,” he said. Gaskin forecasts a legal battle between SCS and City Hall if the contract is suspended, a scenario that will strengthen those like MAPM that are calling for the revocation of the contract. “That helps the cause tremendously. If we can split up these two who are now in cahoots, it weakens them and it strengthens us,” he said.

Dr. David Hinds, Executive Member of the Working People’s Alliance (WPA)- one of the parties in the governing coalition, said he wants the entire contract to be scrapped, but he is willing to give the 90-day suspension an opportunity to “start from the beginning” through consultations and a social and economic impact assessment. “I believe the whole thing should be scrapped- that is my view- but the government has come half way. I say take the three months, talk to people, hear what they have to say and then at the end of the day you may well find at the end of the three months they may well agree to some form,” he said.

Touching on the fact that Central Government has not formally informed City Hall of its decision to ask for a suspension, Hinds said he was not surprised and cautioned that the situation has now become more complex for government. “I think it will be very difficult now for this news having hit the street for the government to back off and say  we are not going along with that,” he said.

Meanwhile, SCS on Thursday continued to enforcing the parking meter system which several MAPM and several private sector and civil society organisations came into being without adequate consultations. They are also angered by the burdensome rates, lack of transparency and the bylaws that empower SCS to auction impounded vehicles without legal recourse.