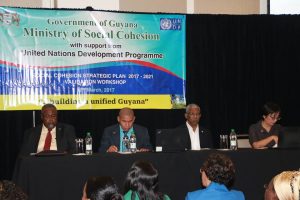 Inflammatory tirades in the public domain, run the risk of degenerating the social stability of the populace leading to civil violence, a situation compounded by existing ethnic polarization—an unfortunate colonial legacy that pervades the political climate.

This was the dire warning by Head of State, President David Granger, who Thursday met with stakeholders gathered to validate a national social cohesion plan, at the Georgetown Marriott Hotel—a confab organized by the Ministry of Social Cohesion and the United Nations Development Programme (UNDP).

Delivering the keynote address ahead of the workshop’s working session, President Granger used the occasion to caution perpetrators and Guyanese generally, to desisting from contributing to the social erosion that has generated violence in the past. 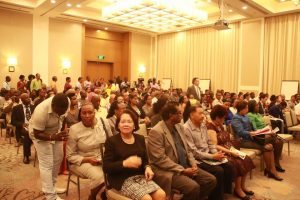 He spoke to the ease with which the ranting “of a few rancorous persons” can lead to racial animosity, calling it a “retrograde step, it has no place in modern society.”

Granger in his address to the gathering inclusive of Public Security Minister, Khemraj Ramjattan and members of the diplomatic corps, expressed alarm at what he called, “vocal efforts by those persons who promote social division.”

According to the President, “we warn that such inflammatory tirades run the risk of generating social instability, of fostering distrust and fomenting disorder.”

Steering clear of the alleged ‘race hate’ attacks over the Phagwah weekend at Canal #1 West Bank Demerara, President Granger instead used his address to appeal to religious, ethnic, political and other social diversities permeating Guyana to be seen as an asset and not a liability.

Granger said the nation has already been scarred by the violence of the 1960s and more recently in 2002.
Calling for greater relations at all levels of society, including on the political front the President reminded that discord stemming from religious, ethnic, political and other differences, as has already been experienced in Guyana, “has the potential to spawn hatred and death…our nation has been scarred by violence which left a lingering level of distrust and the threat of disorder.”

The President in calling diversity an asset versus a liability, pointed to the co-existence of religious worship houses (Mosque, Temple, Churches) in a single community without the taint of religious violence or racial riots.
He said social cohesion is also viewed in a Guyana context as an indispensable element to public security hence the work on the part of the Ministry in leading the formulation of the Draft Strategic Plan for Promoting and Enhancing Social Cohesion in Guyana (2017-2021).

Pointing to some of the measures undertaken on the part of the administration since coming to office two years ago President Granger again defended the establishment of the Ministry of Social Cohesion. “The Ministry is not ornamental, it has an onerous obligation to continue in building a nation in which diversities are embraced, conflicts resolved, networks and collaborations with stakeholders strengthen, an decision making process result in equal opportunities for all.”

He urged those gathered that the Ministry’s mandate not be measured by the size of its budget but “by its accomplishments in harmonizing social relations.”

The One Day workshop was organized by the Ministry of Social Cohesion bringing together stakeholders from across the spectrum to ‘validate for implementation’ the SPPESCG (2017-2021) and was held under the the,“…building a unified Guyana.