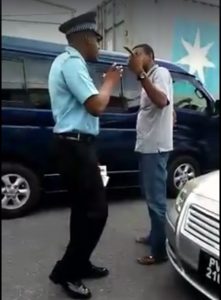 The Assistant of Superintendent of Police pointing his hand in the face of the traffic policeman who repeatedly and politely cautioned him against doing so.

The seemingly drunken Assistant Superintendent of Police , who was seen on video threatening and abusing a number of junior ranks while probing a traffic accident that he was involved in, is currently the subject of a probe, Police Commissioner David Ramnarine said Monday.

“The matter has been investigated in terms of looking at it from its entirety. We should be seeking legal advice shortly,” he told Demerara Waves Online News.

Ramnarine said because the accused is gazetted officer, the matter would have to be sent to the Police Service Commission.

In the interim, the officer remains on duty, but the acting Police Commissioner made known his views on the incident which was recorded and posted on Facebook. “I have seen the video, disgusting as it is,” he said.

In terms of whether he would be charged with any traffic offence, Ramnarine said the Guyana Police Force would  await the outcome of the legal advice.

The incident occurred on February 22, 2017 at Broad Street, Georgetown while police had been questioning him about two road accidents in which the Assistant Superintendent was involved the same day. 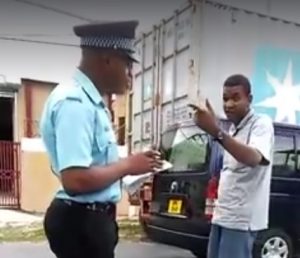 Paul Devendra Ram related that the Assistant Superintendent of Police’s care strick the back of another car in which man and his pregnant wife. “When the guy came out to talk to him and deal with the matter, he (the ASP) became abusive to the guy and myself. It wasn’t a big accident with major damages but it escalated very fast,” Ram said.

He added that while they were heading to the station, the ASP got away from the police and hit his car.

Ram said when they arrived at the station, the Police Traffic investigators allowed the ASP “to walk around like nothing was wrong.”

The policeman repeatedly asked him to “desist from cursing at me me.” “Do not point your hand in my face and don’t cuss me,” the constable said.

Speaking earlier at the opening of several police courses, the Acting Police Commissioner stressed the need for quality service. “The quality of that interaction that you have or you give with the general public will either aggravate the challenges we face or alleviate them,” he said.