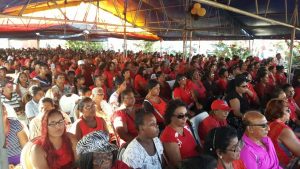 A section of the attendees at the Cheddi Jagan commemorative ceremony at Babu John, Port Mourant, Berbice.

He said Guyana’s constiution does not provide for the President to go ahead and appoint a Chairman on his own.

“We will not take that sitting down. We will have to hit the streets running,” he told more than 1,000 persons at a 20th death anniversary commemorative ceremony at Babu John, Port Mourant in honour of the PPP’s founder leader and late President, Cheddi Jagan.

He noted that it is the chairman, who holds a “delicate balance” between the three government and three opposition commissioners of that elections management body.

The PPP has already said it would challenge any unilateral appointment of a GECOM Chairman in the Court.

Jagdeo and Granger are locked in a stalemate over the interpretation of Guyana’s constitution on whether the Chairman should preferably be a current or retired judge or someone eligible to be a judge.

The President has already rejected the Opposition Leader’s six nominees. Jagdeo has since asked Granger for a number of clarifications and has said he would be submitting another list.

The former Guyanese leader has also said sugar workers would soon be called upon to engage in protests against plans to close several estates.

Also addressing the gathering was former President Donald Ramotar who charged that the impending closure of the sugar estates contradicts claims by government that the manufacturing sector was only contributing a meagre five percent to Guyana’s economy. “If they are serious about creating more manufacturing jobs, then they will have to save the sugar industry otherwise we will have no manufacturing jobs,” said the veteran politician.

He cautioned that as economic conditions worsen, the APNU+AFC coalition-led administration would become more repressive. “They have gone back to the days of racial and political discrimination,” Ramotar said.

Several speakers highlighted the increasing relevance of Jagan’s ideology and methodology in fighting for democracy and human development.

Jagdeo, a former Finance Minister, also lambasted government for running the economy on “plantain chips and cook-up” instead of finding ways of stimulating growth.