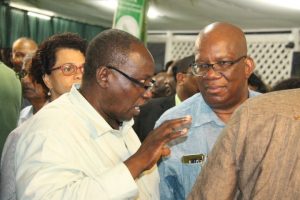 Then Permanent Secretary of the Ministry of Public Health, Trevor Thomas talking with Finance Minister, Winston Jordan at the last Biennial Congress of the People’s National Congress Reform,

Trevor Thomas has been fired from the post of Permanent Secretary of the Ministry of Public Health, in keeping with a recommendation by a Commission of Inquiry into procurement practices at that public service entity.

Minister of State, Joseph Harmon said Thomas was relieved of his duties with effect from March 1, 2017. “His service as Permanent Secretary was terminated…He will still be in the Public Service,” Harmon told a news conference.

There was no immediate indication of where Thomas, a veteran public servant, would be sent

The Minister of State signaled that “some radical changes” would take place as a result of inspections and other steps being taken by the Public Health Minister, Volda Lawrence.

A one-man Board of Inquiry conducted last year by Retired Assistant Police Commissioner, Winston Cosbert had recommended that Thomas be removed from that ministry because of his “inability to effectively carry out the mandate of the ministry and that his testimony bordered on lying.” “The Permanent Secretary was willfully deceptive in his testimony when questioned by the Board of Inquiry and he made inconsistent and deceptive statements during his testimony. The board finds that the inconsistencies were sufficiently material to affect the truthfulness and accuracy of his testimony.”