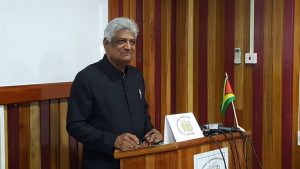 Outgoing Chairman of the Guyana Elections Commission, Dr. Steve Surujbally on Tuesday believed that future Chairpersons should be a judge or eligible to be judge because the Constitution appears to be prefer such a legal luminary.

“The issue for me, the crucial words for me would be fit and proper. If you can get fit and proper together with judge and legal then you have won. That’s the best person ever,”  said Surujbally who is a practicing veterinarian.

He observed that Guyana’s Constitution seems to place higher preference on a Commission Chairman being a judge, retired judge or someone eligible to judge rather than someone who is merely “fit and proper.” “I think that…this is me not being a lawyer…It tells me that the focus of the framers was to in fact have a judge here,” he said in response to a question from Demerara Waves Online News.

Surujbally’s position is in line with the position taken by President David Granger and Attorney General, Basil Williams.

The outgoing Chairman, however, added that GECOM has “never been without lawyers” as Commissioners as well as persons trained in law along with GECOM’s own legal adviser.

At the same time, he does not believe that his lack of legal training had put him at disadvantage in executing his duties during his more than 15 years at the helm of the country’s election management authority.

Surujbally demits office on February 28, 2017, three months after he had been originally due to leave the job.

At the same time, Surujbally questioned whether a judge would be highly regarded as fit and proper because in the United States (US) lawyers they score low on ethics and morals. “If you can have a judge fit and proper, having all the positive elements in his behaviour and in his moral make-up, then ‘yes’ that will be the best person to have,” he added.

Surujbally’s comments were made against the background of stalemate between President Granger and Opposition Leader,  Bharrat Jagdeo over whether the six names submitted by Jagdeo constitute “fit and proper” from whom a new Chairman should be selected. Describing the outcome of talks with Attorney General, Basil Williams as “futile”,  Attorney-at-Law, Anil Nandlall- who represented Jagdeo- says a section of the law cannot be separated from the rest of the Act.

Former Chairmen of the Guyana Elections Commission from 1992 to 2017.

Jagdeo has already said if Granger unilaterally appoints someone else other than any of those on the list submitted to the Guyanese leader, the People’s Progressive Party would challenge it in the High Court.

Except for late Senior Counsel, Doodnauth Singh, none of the other GECOM Chairmen dating back to 1992, none of the others–Ambassador Rudy Collins, gold miner Edward Hopkinson, Retired Major General Joseph Singh and Surujbally– were legally trained.